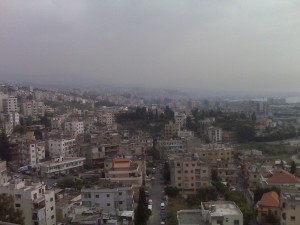 The last time I was in Beirut was in 2006 while helping with the evacuation of Canadian civilians. That experience was, to say the least, mind-blowing on too many levels. But even with the blowing of one’s mind, Beirut was still a beauty to behold, and though we were working insane hours and running on very little sleep, we still managed to make it out in the late evenings; ultimately, I think, it was in attempt to forget about what was happening around us.

This reality is something which may very well be specific to Beirut because it has seen so much war. A clear example of this would be us, sitting atop Sky Bar watching and feeling the shake of Israeli bombs dropping on the country. Ultimately, the human mind and body does what it needs to do in order to create a semblance of normalcy even in the most insane circumstance. The blow-back comes only once you’re pulled out of the situation itself and you’re left reliving its brutality.

In 2006, the airport had been blown to shit by Israel. It was a tactical move, the same as the blowing up of several bridges which linked many parts of the country to one another. Because there was no airport at which to land, we were flown in via military helicopter. This time, I came in through the gleaming airport – all of which looked entirely new, for obvious reasons.

I am staying at the same hotel, and maybe even in the same room. Everything appears to be the same.

Only it’s not. Where the billboards were then of Nasrallah declaring ‘The Divine Victory’, they are now of Scarlett Johansson selling Dolce & Gabbana; where the sounds of dropping and exploding bombs would then quiet a conversation, the sounds of car horns and home-made fireworks serve as typically Middle Eastern compliment; where the shaking of this country wouldn’t then let me sleep, the peace of the bed now lulls me to my core; and, where the sky over Beirut was previously covered by the air of Israeli bombs and fighter planes, it is today saturated with the density of humidity.

When I stepped outside of the airport, I was met by the smell of sand and humidity and welcomed by al-athan, the Muslim call to prayer. I was momentarily overwhelmed by what I had experienced in 2006 and had to push back unexpected and surprising tears, saving them instead for the privacy of the taxi…until we were nearly hit by a crazed man in a van who honked his horn and declared – with a fierce waving of his hand – that my taxi driver was a ‘7ayawaan’ (translation: ‘an animal’, and not the cute and cuddly variety), even though he was the one at fault.

I am giddy with pleasure to be back. Beirut, you have been missed.

++++++++++
Note: Written while seated on my balcony, overlooking the Mediterranean sea.