I recently purchased for the first time ever, Men’s Fitness magazine. Coincidentally, this was the cover: 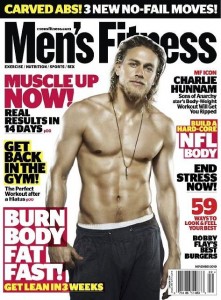 If you have been reading me long enough, you know I have two types: (1) the Jaxx (Charlie Hunnam) / Tim Riggins (Taylor Kitsch) / (the absolute beast in Bronson) Tom Hardy type, serviced by long hair, facial hair, calm and quiet strength; and, (2) Coach Eric Taylor.

In the former category, the men tend toward a pretty ridiculous perfect physique, with the most obvious feature being that they can hold their own in a serious fight (as so many flimsy men exist, this is – for me – hotness to the nth degree), and a full often pouty mouth. As a joke, I would have usually posted the above photo of Hunnam with the caption Doesn’t he look smart?

Only apparently, he is. I have heard rumblings of this from friends who have met him, and now Lainey has spoken and so it must be true. Today Janey pointed me to this article, in which Hunnam throws down in terms of spirituality and belief in God.

I was reading the article while we were skype-ing and squealed at the religious portion only to choke and faint at the training to be a fighter portion.

I have since had to revise the script in my head re our first meeting, when we – Charlie and I – fall in love. Up until this early evening, the script was entirely about very discreet leopard print and long black hair. Essentially, the script was all about me, as much else is regularly. Now however, I must inject in to this script a conversation about God and the wonders of asking…always always always…asking and seeking out information. Because if one’s Faith is strong enough (like, say, one’s abs), then there can never be a question put to them that could shake their Faith.

Absolutely none.
To the (healthy) Believers, we understand – at least within Islam – that everything (sorry about that arrogance sitch, Dawkins) can never be fully within our grasp, because Knowledge of Everything exists solely within Him. However, it is a duty of the Believer to seek out knowledge at each and every opportunity, asking questions about everything, with nothing off limits. (If one’s roots are solid, there is no worry when limbs sway.)

With a few words, Hunnam stood facing the often thought but not always stated heart of a debate between a Believer and a non-Believer. Stripped down (pray yes, please), he places challenge to the notion that Believers are non-thinking, fundamentally unintelligent, ignorant beings.

Personally, I believe this divide comes from the underlying asinine and totally unfounded idea that religion and science do not and can not mix, and that science is an exercise of thinking, whereas Faith is not.

*sigh*
The two hottest things about a man, aside from well formed pectoral and abdominal muscles? (1) A man whose Belief is sophisticated, thinking-based and inclined; and, (2) none of your business, Reader.

Incidentally, do you watch Sons of Anarchy?
You should, for Kim Coates. Recall Kim Coates here, who has since had a very special place in my heart.