February 27, 2011 - Randoms, Snapshots + Videos, The Funnies, Travel - Tagged: all of Taiwan is at the zoo on a holiday, Chiang Kai-Shek Memorial Hall, Chinese New Year, crowds freak me out, Engrish, guava fruit, how to be a tourist ninja, I am a tourist ninja, Longshan Temple, most awe inspired of all for the love, Sun Yat-Sen Memorial Hall, Taipei, Taipei zoo, The National Theater, today I don't like children, Year of the Rabbit

Sensitivity is the heart to make peace with the most awe inspired of all for the love.

I couldn’t have said it better myself.

They have a way with English words here, and then to ensure the most awe inspired of all for the longevity, they print these lego’d words on to t-shirts. The above was one such t-shirt which I followed around for 12 minutes in order to write down the full message . (In my head, the stalking seemed less offensive than taking a photo.)

I think I am in love with Taipei. On that note, I may be delirious as I have been outside since 9 am being awe inspired by…everything.

One of the things which astonished me about Hong Kong was the density of its population, with regularly seen apartment buildings stacking over 10,000 people.

To my surprise, this is not at all the case in Taipei. In fact, the areas which I visited today barely saw a dozen individuals in one given moment.

I did some research and discovered that this is because the entire population of Taipei is in fact at the Taipei Zoo. And by “I did a little research”, I mean that I decided to visit on a Sunday, the eve of a holiday. I am filled with many stellar and awe inspired ideas such as this.

Added to the list of things which I dislike? A crowd. Specifically: a crowd more than half of which are small children. I would like to tell you about my experience at the Taipei Zoo, only I am still recovering and do not wish to relive the trauma of earlier this evening. Suffice it to say that I ran out as quickly as possible, once I was told that the Panda Show (it’s a show? It’s a show!) was finished for the day.

Also the Gondola, about which everyone speaks, sits outside the Gates of the Zoo, and it was to be a 4.5 hour wait before I could hang above Taipei from a string. I decided to instead come back into the city center, but not before climbing (yes. Climbing.) over women and strollers on the metro.

Upon exit to fresh air, I immediately went to my happy place since the last 24 hours: guava fruit. Guava fruit the size of lovely silicone breasts. I have been eating and drinking fresh guava at every moment possible. When guava is most awe inspired of all for the love, no one can resist. 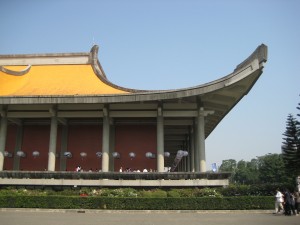 My first guava juice I found at the Sun Yat-Sen Memorial Hall which is, like most traditional buildings here, absolutely massive; and, unlike the other buildings, populated with students practicing dance routines. Michael Jackson is popular here. 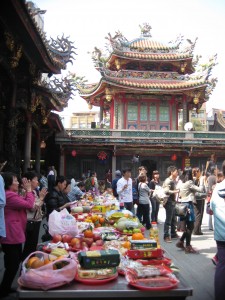 His popularity only rivaled by the Buddhist monks I watched and heard sing (is that what it is? Maybe it is prayer?) in Longshan Temple. I had thought that the Temple I saw in Hong Kong was gorgeous until I set my eyes on Longshan. I have no words to describe…wait…oh, yes I do. Longshan is most awe inspired of all for the love. Definitely.

For all intents and purposes, it is an ocular feast. While taking in the rapid explosion of colour and design of the Temple, I surely looked as though I was experiencing a seizure. I believe the only reason I didn’t was because my eyes would occasionally focus on the buffet. (Not really a buffet, but in fact tables of offerings…for Buddha? For the Temple? Do monks eat cookies and chips? Believe it or not, I am honestly asking, so feel free to email my dumb self an answer or two.)

The National Theater came next, as did the beautiful gardens surrounding the Chiang Kai-Shek Memorial Hall and the Hall itself. This is where I spent the most considerable part of my day, enjoying the gardens, the changing of the guard and the little kiddies making peace signs ready for the cameras of their mums… 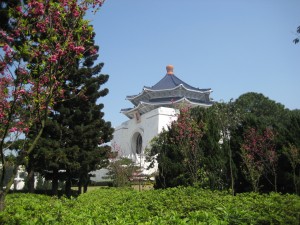 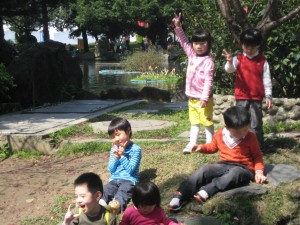 Great day overall, which only got better when I accidentally found a park of lanterns…and then even better when they all lit up as I was sitting beneath them. Truly, their lighting was most awe inspired of all for the love.

Note 1: I keep wondering why they are celebrating Easter early, but only until I remember that it’s the year of the Rabbit. Hitchcock would have had a field day had he seen the hundreds upon hundreds of faux bunny rabbits all over the city.