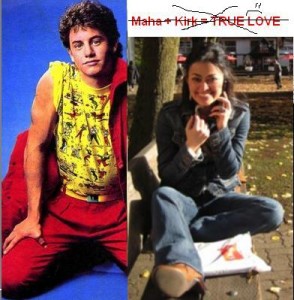 My infantile crush was on the cartoon character Orion Quest of Grendizer. On occasion, I find myself still humming the show’s tune, and would today argue that Grendizer far outdoes Transformers.

NERDS! WE ARE ALL CAPS DISAGREEING.

When I matured, I developed my first ever really true-and-tried-though-never-tested crush on you, convinced that I was in the throes of passionately heady and unrequited love. This, well before you found your version of God and decided that humans have only been around for, like, 17 years or something.

When mum and dad punched one another in the marriage, I decided to take advantage of the wound which had swallowed my mother whole. (What can I say? She was vulnerable, and I wasn’t v nice.)

I breached the subject matter of moving to Los Angeles (Beverly Hills specifically) and dating you. I was so mindful and devoted to this idea that I drew up a contract on a napkin and made mum sign that I would be allowed to date you when we moved to L.A. Naturally, the dating would have been ever-lasting and we would have been married. I was 13.

I would have mailed you a copy of the contract, only I accidentally flushed it away, which begets the inevitable: What if?

Having matured, I now know that we would have been ill-fated, you and I. You, eventually calling me a terrorist, while I repeatedly asked: Why tf are you scared of science?, and quickly following it up with: MUSLIMS HEART JESUS (pbuh)!!

Right. So yesterday, my Boss Lady told me that it’s not necessary for me to say everything out loud. Something about an inside voice. Because of her encouragement, I thought to write you this letter because surely, this is one quality — ♥ing you, Kirk Cameron — which I should never hide.

Love,
Maha
P.S. I believe in dinosaurs. See you in hell!