Every Girl Should Have ‘One’ 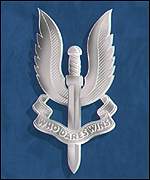 By ‘One’, I mean her very own personal British Special Air Service Officer, their motto Who Dares Wins. I found Mine in Beirut – he is of the Air Troop variety, flying out of planes, a.smashing things and people, and then somehow super-leaping back to the airplane.

I nicknamed him ‘Killer’. Only I didn’t tell him about his nickname, for fear that he would parachute into my hotel room, Killer me, and then leave without a trace. (He’ll know now that it’s on here; Hi Killer!)

How to meet and nab an SAS Boy for yourself
Obviously, you will need to be located in a war torn region. Look for the boys jogging and smiling as bombs drop around them; quite likely, they are of the SAS variety.

If you are really adventurous, hang out near cubby holes where ‘insurgents’ (but only those defined as such by the lucky few not belonging to The Axis of Evil) hide and make sweet chai.

If you are not too adventurous, there’s always the internet café of said war torn region. Spy the only boys who are reading neither the news nor the most recent updates titled Where Can You Hide Today?; they will be wearing shorts, t-shirts, sporting a tan and using a British tongue nearly incomprehensible. If you listen closely, they will make subtle ‘vrooming’ sounds as they move their mouse. #notaeuphemism

My Own SAS Boy and I met in the business center of his hotel (my hotel sat across the street with a sick internet connection). I didn’t know how to work the computer, he helped me manage and we got to chatting. He had seen me the night prior – a memory I do not hold – when I was lost and asked him if he was Australian. In my proper defense, I was told that we (Canadians) were to be hanging out with them (Australians); I saw a blonde, heard an accent and so approached. Simple but little did I know the level of treachery I had committed when I asked a Brit – an SAS one, to boot – if he was an Aussie.

On the physical size of The SAS Boy
They appear small (please don’t Killer me) – My Own being perhaps 5’9”, but they’re packed with strong fiber goodness which allows them to take out a man thrice their height and ten times their weight. Upon great reflection, I do think the compact nature of the SAS has to do with the agility required to leap tall buildings and propel oneself from planes, landing squarely in cubbyholes 10,000 feet below.

They are, for those of you interested in knowing, rock hard. I threw random items at Killer and they bounced off as though hitting a brick wall. Eventually, Killer asked me to stop being a child throwing random objects at him. I mumbled and pouted and he finally let me throw one final tire at him as a farewell to the activity of throwing.

On the character trait of The SAS Boy
Focussed.
Determined.
Alpha.
Male.
Fear-LESS.

These are not Boys with whom one should mess about. While walking around Beirut with My Own SAS Boy, I can tell you that I felt very safe. Very safe, indeed; the safest, in fact. There’s something about their line of duty that makes them radiate an aura of complete and total blanket safety (unless, of course, you’re their target). I guess that would be: because they’re trained assmashing killers.

The word hesitate does not exist in their vocabulary, and for that they are to be admired, as it runs into all aspects of their lives, not just the physical embodiment of their work. Case in point: Within moments of teaching your BlogMistress how to work her computer, Killer asked to take me for a coffee. Right then and there on the spot. (I thought: If I don’t accept, he may Killer me…and so I accepted.)

After coffee was over, he asked to take me for dinner. Right then and there on the spot. (I thought: If I don’t accept, he may Killer me…and so goes the rest of the story.)

Nothing stands in their way and if an SAS Boy wants something, he does what is needed to make certain he gets it. And this I mean literally; nothing stops them, neither physically nor mentally — it’s a pretty spectacular thing to watch as it drips from them and engages all aspects of everything they do and touch.

On the nature of conversation with The SAS Boy
You will not be surprised to learn that among one of the first lines of conversation I had with Killer was
So…do you ever wonder if what you’re doing is wrong? and then
So…uhm…will I, like, one day be sitting in my living room in Palestine and you’ll fly through a window and Killer me MEANING you may one day get wrong orders MEANING have you ever wondered if you’ve already received wrong orders MEANING have you ever Killered anyone who might be innocent?

Lucky I that Killer has a sense of humour and answered all of my questions, even if it was a mere “I really can’t answer that!” which I think is code for That’s The Line That Wins Most Chicks. But I’m relentless and he nicknamed me ‘Unnie Ot’ which is Canadian to the British ‘Honey Pot’. I stared in wonder and confusion, looking for a translation on the wall, the floor and even the window as I had no idea what that was. Nowhere was there closed captioning for the British Hearing Impaired. (Stupid Beirut.)

Killer was nice enough to finally tell me that Honey Pot is a term of endearment used to describe someone who can pull secrets from people very easily. Upon hearing this definition, I smiled and asked: So, was it you who caught Saddam? And can you fix the World Cup?

On the reliability / loyalty of The SAS Boy
Apparently, SAS Boys have to be at the ready at the drop of a pin, throw of a hat and wiggle of a bottom. They all have a special beeper that, when it beeps, they have to meet at a certain location, are given their orders and then flown out. My Own SAS Boy was riding his motorcycle when he got beeped; he had to leave it and his keys with his friend so he could fly to Beirut within two hours. This would mislead one to believe they are unreliable to anyone but Her Majesty. As I can attest, I’ve had Mine since 2006 and we have not yet lost touch for any extended period of time. In fact, he has always been kind and pinged a Hello email from whichever part of the world in which he finds himself.

I have already secured the following from Mine, as he graciously accepted the responsibility should the need arise (and to which he is beholden until I drop dead). If ever I am in a state of terror and I need to be saved, then he shall do the saving. Because if we’re talking true loyalty, it never hurts to have that loyalty come from a friend who knows how to disentangle a b*mb, make one, crash through a window, leap off a building, outrun and outfight most all other men, make ‘vrooming’ noises as he uses a mouse, ride a motorcycle, and wear the shit out of both a suit and a tuxedo. (I knew you’d agree.)

P.S. Specifically, he is of a ‘sabre squadron’ skilled in parachute insertions (HALO, HAHO, static line etc). Yah…I don’t know what HAHO is either and wonder if it’s pronounced, like, Hey Ho how much?

P.S. Update 2011: Here’s how amazing he is — I recently received an email telling me he was in a particular part of the world (an entirely different continent, some continents away). I too was traveling and would I be around on this same continent within this time-frame so that he could pop over for dinner. Amazing. I might propose.

7 thoughts on “Every Girl Should Have ‘One’”