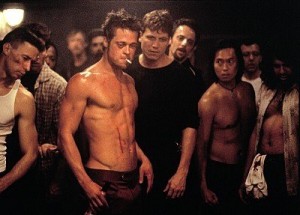 Y’all remember S? He’s been MIA for some time because he’s finishing his screenplay. Though S has been working a great deal on his writing, I am humbled that he still finds the time to pop in here for the occasional quickie read. (Hi S!)

In an email he sent, he asked: PS — I do, however, have one question: When a woman lists “protection” as a prime attraction attribute she looks for in a man, what the heck does that mean? Protection from what? Wind? Rain? Roving packs of dingos? Great White sharks? Bonks on the head? Do women really feel so unsafe they prize a bodyguard above all else?

…so below, I answer the above.

It’s not that I feel unsafe (at least not here in North America where I don’t have to worry about rape as genocide and my man murdered due to his chosen religion) or actually need protection. It’s more that I want to make certain the man I’m with would – should the occasion arise – be capable of protecting me both physically and where exercising his brain happens.

This doesn’t mean I can’t protect myself (though in some instances it most definitely does), nor does it mean that I would not protect myself should the need arise. It also doesn’t mean I can’t speak for myself or stand up for myself; but rather, it does mean that I believe he should afford better physical protection and equal mental faculties as well (as the ‘metaphorical’ bloody knuckle is equally an exercise in fierce intelligence).

Ultimately, I like me a fearless, and aggressive man, both in mind and physicality.

In return, there are things which he could find inside himself (to a degree), but are better received from me. For me equality does not mean ‘sameness’, but rather, recognition that the differences inherent in both must be equally valued and revered.

The best way to explain this is to reference two of my favourite movies, the quintessential chick flicks: Fight Club, and Gladiator.

The former rips into the notion that men live in gyms and sculpt their bodies for the aesthetic (read: Mr. Universe) rather than out of necessity (read: war & hunting), and that this changes the very nature of masculinity. In the later, Crowe’s character embodies all of the characteristics I look for in a man. Especially the short skirts.

As we don’t live in the age of Maximus, I find that I lean toward the aggression of Tyler (who > had he lived in the time of Maximus, would have been a less romantic version of).

Tyler Durden is the anti-Metrosexual. I thought I used to dig the Metrosexual, until I was placed in some situations where the Metrosexual proved himself the Superpansy. The Tyler Durdens of this world are primal and aggressive and they bleed and they don’t manicure their nails (though they do keep them short and clean).

When faced with challenge and fear, they are anything but scared…which, I think, is a rare quality these days because it seems that nothing is easier and more pedestrian than a man on the run.

As an aside and beyond the above, let me get to the nitty gritty of Tyler Durden. As basic instinct dictates, Tyler seems to possess both incarnations of swaggering rightfully-cocky sex-bomb & animal. Keeping in mind that I think Brad Pitt’s kind’a ugly, the swagger which his character carries in the film is based in both his intelligence and his physical ability.

On a personal note, I’ve only ever met two men who fit the above profile(s). They are the archetypical alpha males and always, there is an aggression that sits right beneath the surface and in to which they could tap (and both have) should they need to.

8 thoughts on “The Metaphorical Bloody Knuckle”