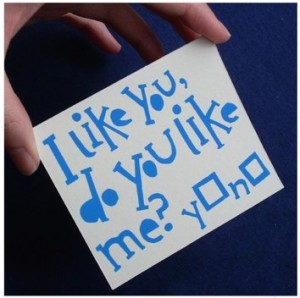 One of the best (Chinese) proverbs ever, perhaps.

Yesterday, my girlfriend and I were talking about boys (not to be confused with the male species as defined here). She mentioned how an interesting boy saw her in some situation and her girlfriend clocked him looking at her, considering whether to approach, and then didn’t approach. And so at least he was looking and thinking.

Not “at least” anything.

We do this all of the time, and I am as guilty as the next. Conversations had with my girlfriends all of the time about this exact same scenario, or a variation thereof.

“He said he was going to call me.” (But didn’t.)
“He responded to my text message a few days later because he said he just saw it.” (While he’s practically got his blackberry shoved up his nose, he’s so attached to it.)
“…but…but…but…”

Listen. I get that both men and women do this, but for me there is a heightened level here because I am so drawn to one particular type of man: The Action Oriented Action Figure. I can be pretty severe about this sort of a thing because I have a very distinct taste in men and because I am a very distinct flavour of woman who is surrounded by men of this caliber. Almost all of the men in my family are Action-ers, as too are the women. When the time is right, we don’t fuck around and while that has its down points, it is also a very good thing because you will always know where you stand and you will never be played.

That said, I also know that this sort of behaviour is rare, and again, mummy is likely right now frantically sending me smoke signals saying: THIS IS WHY YOU ARE SINGLE. I am alright with this. I am alright being single until Action Man comes along and throws me over his shoulder (with my permission, natch).

Also, I know that it is an on-going struggle not to say “…maybe he was thinking this…?” because unless he tells you. Unless he pushes you against a wall and kisses you. Unless he pulls you in close (remember fellas: Don’t be a rapist.) then “Which. No” because talk really doesn’t cook rice and everyone needs a little carb action now and again.

There is a saying in Arabic of which my momma reminds me always: Don’t get tangled in ropes hanging from the sky. Basically, it means that we shouldn’t get hung up on things which are not anchored properly or safely or even in view. Words until actioned are ropes hung on God knows what, but usually you can not see the anchor. And when you play in traffic, then it should at least begin with a partner, and not started as a solo sport.

Remember that book He’s Just Not That Into You? Why have we all forgotten this book which, believe it or not, I think is a really simple and clear set of guidelines asserting that if a man digs your ass, he will also cup your ass (metaphorically, of course. Mum and dad, I have never had my bottom cupped. Promise).

It’s really so simple: If they like you, they will action it. Full stop.

This isn’t to say don’t have mild crushes; it is to say, don’t get hung up on the mild crushes and keep yourself open to other dating opportunities and other men who will take action. Eventually, the non-bottom-cupper will fade away because he was never meant to be in the first place.

Keep yourself to a higher standard than “maybe he got busy” or “I’m sure he really wanted to come BUT…” Forget the but-s, and forget the excuses because you have enough shit on your plate for which you must answer and you definitely don’t have to answer for his inaction. If he wants you, he needs to be secure enough to make a play for you. And where your patience is shot to shit because of uncertainty in what in the fuck is happening around you, then ask him out and put it to bed. If he’s game then he’ll play. If not, then please make a run for a long pass with another man.

On this note, why aren’t men asking women out anymore? When did “let’s hook up” replace “Would you like to have dinner with me, can I pick you up at 8?” FYI to whomever changed the rules: I don’t like them. I don’t hook up. I like proper date questions and proper dates and a man who will say to me “I really look forward to sharing this with you…”

Why is it so hard for men to do this? Best answer I ever received from a man was: Men are fundamentally insecure. Our egos are so fragile. I think women — in the world of relationships — are far more courageous.

Is this true, dear Reader? Do you agree with this assessment in general terms (while recognizing that not everyone can be washed with the same shampoo)?

Last point is that which both men and women need to remember, regardless of the gender specific nature of this quote: “Fortune is like a woman – if you miss her today, think not to find her tomorrow.”

Napoleon said this. A man who though small in stature, was apparently a rock star sexing phenom. Also, big on occupation, war, and interesting jackets and so perhaps a troubling Friday night date.