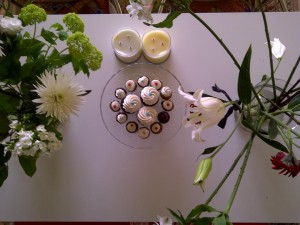 Have I mentioned that my family is predominantly one of Alpha Males?

Today, two of them came over — my baba, and one of his brothers, amo (Arabic for uncle, on one’s partileneal side) Mustafa. Naturally, I served them mini-sized cupcakes with hearts on them. I also sprinkled them with fairy dust while they were leaving.

I woke up this morning thinking that this would be a good idea. When I brought the cupcakes home and stared at their delicate, I thought: What the fuck? As I am not one to half-ass anything, I served the cupcakes on my very wee vintage fine bone china saucers covered in flowers and trimmed with gold flakes. Neither of them said anything, until my father said something. Staring at the plate which his hand dwarfed, he let out a frustrated sigh and asked me for a “real plate.” I pretended not to know what was the matter and he just stared after me like I maybe wasn’t related to him.

Honestly. I might be injecting heroin behind my own back.

Before they arrived, I had a fun back and forth with my beautiful baby cousin Deema, who I should probably stop calling “baby” because she is about 46 years of age now. She began a project about Islam with her schoolmate and was told that it was illegal or some such, and she risked getting into trouble. Likely because it is too progressive or it doesn’t toe the ignorant line of most of the Middle East’s version of Islam. But she’s not stopping, and so I told her I would support her no matter what the outcome and would visit her in jail if need be, with cookies, because I believed in her project and this is what family does: We support one another (even when we don’t agree. We support one another, and if we don’t, then we can’t God damn call ourselves family). Lucky, I agree with her initiative and project and so the support is easy as Sunday morning.

After the Alphas left, I rang my amto (Arabic for aunt, on one’s patrilineal side) Arwaa7 and spoke with her briefly to thank her for the lovely gifts she sent back with my dad. She has not been feeling well and while I am not someone who is ever at a loss for words, hearing her usually vivacious and extremely well spirited voice quieted to nearly a whisper shattered my heart. Please keep her in your prayers.

Finally, I closed my afternoon by Skyping with mama and the entire family present. She is in the Middle East at the moment and they were about to have isha, which is the final meal of the day had at around the unhealthiest of hours maybe 9.30 or 10pm. Why go to sleep light when you can instead roll over to bed filled with home-made pita and felafel and fresh cucumber and fried cheese and some hummus, washed down with sweet chai? The joke is that my mum will come home to me with an additional 20 pounds around her little body. Which. May not be such a joke after all.

SA7TEEN YA SUMAYA!! What are you eating now?

While I stood in the kitchen preparing for tonight’s dinner party, they plunked the laptop onto a chair and I sat with them after giving them a tour of The Cloud Cave. Mama, a little girl in pink pajamas; my cousins, studying like the amazing young women that they are, and who will surely never let their parents down (unlike my sorry ass); and, khalo (Arabic for uncle, on one’s matrilineal side) Nasr — who I adore beyond measure — engaged and engaging and with a heart the size of the Gaza Strip, always.

All in all, a perfect family-filled day. AlhamduliLah.

4 thoughts on “The Family Day”