April 27, 2013 - Maha Monday, Mindful Relationships - Tagged: booty-call gone bad, dating, hooking-up is not fun, How can I get him to like me more?, I don't just want to sleep with her, I don't just want to sleep with him, I want more than just sex, relationships, self-awareness, self-respect, sex without string, valuing oneself, What can I do to get him back?, Why isn't he calling me back? - 8 comments 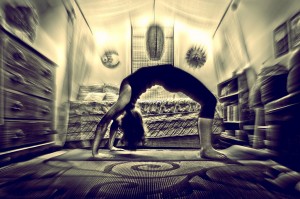 I have been sleeping with a guy for 3 months now regularly and I think he might be sleeping with other women because we agreed that this was just hooking up. About two weeks ago, I told him that I wanted to be exclusive and he said that he wasn’t interested. I know how much he likes me. because we’re perfect when we’re together so I don’t understand what’s holding him back.  We are perfect and is there anything I can do to make it easier for him to be able to give me what I need? I texted him a few times this week but he hasn’t responded and I don’t understand what’s happening. What can I do? I miss him so much! Thanks!

Oh honey, I want to give you a hug whilst simultaneously slapping you across the face. Let me be the first to say that the bridge pose is one of my favourite yoga poses, during yoga. It is not something I am fond of emotionally for any extended period of time unless I know that there is a strong man’s hand beneath my back providing support. In order to even get there, however, a man has to earn and prove that he is worth his salt rather than having it bestowed upon him by me for no reason. (For the record: His sleeping with you does not, in any dimension, amount to worth earned.)

I want you to keep in mind the following generalization which has stemmed from much research: Men fall in love far more quickly than women (on average, a woman takes about 14 dates to a man’s 3 dates to consider herself falling in love). Additionally, both men and women are far more intrigued by that for which they must work. A booty call hook-up requires a few words typed out on a smart phone and then maybe 6 minutes in bed. No one is in to impress the other and though you may believe that you have a magic v@gina, it will not make him fall in love with you. Unless it can sing; then…well, I might fall in love with you, too.

The scenario in which you find yourself is simple and shouldn’t be complicated: He was just into you for the s/x. If he was interested in you for anything above and beyond that, he would have made it clear (likely before you, according to research). That you have told him you want more and he has hit the Avoidance Button is not complicated. Really. He’s not sitting around with his mates pondering the Pro-s and Con-s of being with you. He’s not having sleepless nights wondering if this will work long term. He is definitely not crying into his coffee mug wondering what he might do to “to make it easier for [you].” In fact, he has made it unequivocally clear: He’s. Not. Interested.

You know what he might be doing? (A) Not thinking of you at all; and (B) Texting other women and solidifying another booty call or calls scenario.

I am giving you a hug, because I know that hurts. In fact, it sucks the big one that the boy whom you like isn’t the boy who likes you back – we have all, absolutely every single one of us, been there. Do yourself a favour and don’t wallow; instead, have a few good cries with your girlfriends and then get back out into the dating game. Ultimately, in the grand scheme of things, one boy isn’t such a big deal. Rather, he is a footnote to an end note in the story of your life. In order that he is a big deal, the feelings you have must be reciprocated from his end with equal force. Trust.

Be selective in your choices, most especially in this realm of relationship. The more you value yourself, the more with-value you will be treated by a proper gentleman.

Let’s take this a step further and break down your sentiments. First, that you believe you are “perfect”. Wrong. I mean, clearly: Wrong. If you were perfect for one another, he would have invested in the relationship above and beyond some slapping around of fun-bits.

Second, you “don’t understand what’s holding him back”. What’s holding him back is that you’re not the one for him. Again, I am giving you a hug. Don’t rationalize this beyond what he has said to you; don’t read into this more than is necessary – if he cared about you, and he was a man worth his salt, he would do whatever was needed to be with you. This is the proper behaviour of people who care about one another; there are no stop-obstacles, but rather challenges to be overcome in order that people may be together. Anyone who tells you otherwise is lazy of mind and spirit; and, they haven’t yet learnt how to love enough.

Third, you are curious to know if there is anything you can do to make it easier for him. Yes. You can cut him off. This is easier for you and easier for him, though it may cause you a little bit of pain now, it is far better than excruciating pain down the line because this will only get worse.

Already, there is imbalance between you and while the ebb and flow of imbalance is natural every once in a while, you have hit tidal wave levels from which there is no recovery. One of you wants more, the other clearly wants nothing.

This is what we call an impasse, a non-negotiable starter and you must choose from one of the following three scenarios: (1) with grace, accept what he has told you and cowboy-up, walking away; (2) keep texting and messaging him while he ignores you. Unless he is Jason Bourne or on the run from the law, there is no reason why he shouldn’t be messaging you back. Ask any man and they will state the obvious – when they care about a woman, they will always find a way to communicate; or, (3) go back to sleeping with him and de-valuing yourself in the process. De-valuing because you have already made it clear that you want more, and he has made it clear that he’s not interested. So if you go back to sleeping with him, your message is this: I am willing to take your scraps, not receive what I need, and still let you f/ck me. Also, I am wishy-washy. (I’m not sugar-coating this because I have seen one too many of my girlfriends place themselves in this position. Beyond any reasonable doubt – most men and women, unless they are cut from a character of stone – will respect others only as much as she respects herself.)

In preparation for future engagements with other men, ask yourself if you’re interested in being anyone’s booty-call. In this age of free and fast hook-ups, it is almost expected of women to be “cool” with this. To that, I say: F/ck this expectation. It is not for me, and any man who wishes to engage me will understand this. It may not be for you either, but in order that you might communicate that efficiently and rationally, you need to be solid in your self-awareness. Know where your red-lines are with a man and engage them accordingly.

With that, please remember what I have written before – each of us, we are a variation of the Wittelsbach-Graff Diamond and unless you treat yourself according to that strength, and with humility, no one else will.

Best of luck; I’m in your corner,
M

Image courtesy of I Know That Girl Yoga.