Lesson #10: Balance is not just for Libras 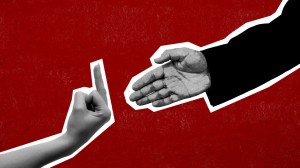 “Once I have seen your face I shut my eyes to others.”

David last year told me that I, unlike any other individual she knows, has a sense of loyalty unmatched. Meaning, when I care about someone in the romantic sense, I actively choose to disengage from others entirely and without hesitation. Even when not dating said interest, I turn down dates and invitations from other men because I believe that to engage someone, while having feelings for another, is a way of cheating on my self.

Writing that out hurt me more than it hurt you to read it, because God damn, I am some kind of masochistic asshole, aren’t I?! I have been staring at that sentence for some time trying to stomach the total stupidity of this thinking and all I keep coming up with is ‘I need a fucking cookie maybe laced with some arsenic’.

Maxi would call this a form of ‘dating inception’, of which he too has been guilty. For always, I have never seen this as my being loyal to others, but rather my being loyal to myself, respecting my own feelings rather than deviating from them – even if they are feelings standing alone in the middle of a football field, when it’s ski season. And, they’re trying to blow a bubble-gum bubble when the wind is coming at their head at the rate of 100 km / hour.

Sidebar: I would like to here blame my mother for raising me in a way which misunderstood the world as being one covered in plush carpet, including the ways by which other people treated us. Really, she raised me far too loyal for my own good – and always, she used the words self-respect which, you know what? 98% of the world knows neither. (PS “Thank you, momma” I do often grumble. Because no person is writing an article about how much of a shit-head I am, though no doubt many could.)

Lesson #10: Loyalty should not be exercised but in a state of complete and total balanced trust. The question then becomes how does one know when it’s time? To get tautological, you know it’s time, after a length of time. When it has been established, through actions, that if one of you gives more than the other, then the other will make up for it by giving more, that you might not need to give as much. Think of this as your rubber band theory – the band is the relationship and it is being used to its purpose when it is stretched and perfectly balanced between two hands. When one hand is tired, the other one automatically knows when to step in, and trusts that when it becomes tired, the other hand will step in to help support the relationship maintain its purpose, which is as a safe-space for both individuals.

It is as tricky as it sounds…because the pessimist will ask “but if you are both waiting, then what if neither of you ever steps up and the situation never expands?”

The answer to this is equally as easy – if the situation never expands, then the situation was never meant to expand. Simple. If it isn’t organic and happening on its own, if two people aren’t naturally, because they both want to, stepping up their game incrementally in balanced manner, then they aren’t, nor should they be going anywhere. In the long run, this is best for both. Again, and as always, don’t force the situation (because the fuck are you interested in being the one who always does the work to make things work? Surely, surely my love, you have better things to do and more important people with whom they should be done?).

Here’s things – this is absolutely critical in the early stages of dating. It helps you both learn to give and to receive; it defines borders and shared experiences and lets you each put in the elbow grease required to build and maintain a healthy environment within which neither of you abuses the good will of the other. Without this really exquisite dance, neither one of you will have earned your place in the other’s life; this always always always then leads to imbalance and is a far shorter and quicker road to resentment.

Finally, this rule sucks balls if you are a natural giver and you get excited by giving, like I do. Sorry.

Lesson #1: Don’t stand next to their pile of sh/t unless…is right here.

8 thoughts on “Lesson #10: Balance is not just for Libras”