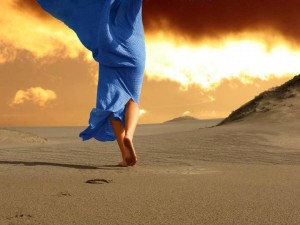 I asked, “Why have I received only this?” A voice replied, “‘Only this’ will lead you to That.

Once upon a mid June’s eve, I received an email which left me frowny-faced and put off. For a while thereafter, I prayed that God provide clarity re a particularly challenging and often uncomfortable circumstance in my otherwise golden world. He answered my prayers in the exact manner which I had laid them out:

1) Sooner, rather than later;

2) Give me clarity through words;

5) Accept with neither grief nor pain, this clarity.

And so, I took my pain and hurt and allowed it to wash over me for a three day mourning period wherein there was an emotional ebb and flow between anger, hurt, confusion, gratitude, and oddly – relief. Relief because somewhere in our hearts, we always know before we see, and our choice is to either turn a blind eye or remain eyes wide open and accepting. I chose the later, treated the situation like a science project wherein I stated my hypothesis, waited for the outcome, and then made a decision accordingly.

The situation aside, because it is merely some pages in the story of my life, there is something most challenging about having our prayers received and answered with such sharp outlines, that to blur or ignore them is quite impossible. Challenging because often, when we experience pain, most of us wish to wallow and roll around in it. A compulsion to look into every one of its dark corners and cry out of fear and hurt and some more pain and more reminders that YES! We ARE hurting! Lest. We. Forget. Even when we have made the decision which brings on the sadness.

Further evidence that we human persons are often a complicated clusterf/ck of wtf-s?! Confirmed by the science of understanding pain, wherein it has been found that much of our emotional sadness is in fact brought on by our own chosen and well-tread patterns of thinking which, after enough time, become neurological pathways in which our thought patterns find their footing quite easily. As example, take if you have treaded the worst-case-scenario path for often enough, then your natural inclination will be to automatically walk down that road in the next scenario and all after. (Clearly, I am not here discussing emotional trauma due to abuse or of a chemical sort. I am sh/t-talking about the every day lameness of broken hearts, dating fiascos, broken friendships, #FirstWorldProblems, pain over the ending of celebrity relationships, etc. (ROBSTON 4evah!))

I wish I could understand why this compulsion often exists, but in the absence of that knowledge – relatively impossible to pinpoint – I believe the only thing we can do is to refuse it. Definintely, a jihad of sorts, not to wallow in hurt and pain and lick our wounds for any extended period of time.

Like in the above instance; something was happening, I asked for clarity, I prayed for relief, I received it. So why in the sh/t would I then be sad about it for any period of time?

This, a reinforcement of a world view I have been working through for the past few years. That ultimately, this world is nothing if not always a struggle at every turn, and where we can avoid self-cutting, we really and truly should. At the end of the day, all we have is a handful of years which, when we pass out of this place and onto the next, will feel like nothing more than a dream.

The challenge to us then becomes training our minds to look at the darker corners of sadness and say ‘Thanks but no thanks’, to look at Mr Wallow’s bed of supreme seduction and respond with ‘Nope, not interested. My life is outside, precious moments waiting to be found and experienced. Take your bed and shove it, please and thank you’.

I’m not saying it’s easy, but I am saying that it might be necessary.

Photo courtesy of Rumi (Like, if you do not already).