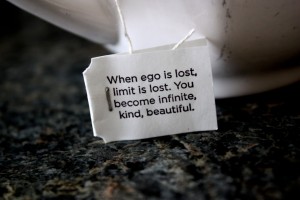 My ego hates Freud
Over coffee with Trouble (welcome home, Mr G), my friend and I conversed about the current state of affairs regarding social media. His words were “[Insert any thoughtless social media tool.] It’s the lowest form of behaviour; approval by total strangers to feed egos. Congratulations!”

He drove home a point which I had started considering when one of my last articles received several hundred Likes in under 20 minutes. It felt amazing and validating, until I felt commodified and quantified into a tiny little box that had nothing to do with who I am (though most of my sum to date is found in the totality of my near 1,000 cumulative posts; something which I hope evolves daily).

I was asked to begin this site in 2004, by my then editor Charlie, while writing for the London News Review. Over the course of the last nine years, this home is where I come to sort my ideas, experiences, and where my voice is strongest. Daily, I receive several requests to add money-generating items and daily, I move these requests to trash because I do not wish for this space to be anything but the purest expression of me (with any ulterior motive slimmed to the highest degree possible).

Then suddenly, I had several hundred Likes on just a few words. My ego hit an unmatched sugar rush until I remembered that other time another of my articles received over 1,000 Likes in under 20 minutes. Catch that? I had forgotten, and then was suddenly reminded.

Do you know what I have never forgotten? The first time my Aalya’s beloved Sophia called me khalto, which is the Arabic for ‘aunt’. That time I met a man who, when he swept his eyes over my face, made me want to touch my lips to his and learn him. The every time that my father places his arms around me, and the every time that my mother has put her cool hand to my forehead, reading Quran to calm my aching heart. The rare moments when my baby cousins come to me for advice, spilling hearts through phones and I am able to make them laugh through tears. And, every single time that my girlfriends and I laughed so hard we began to cry.

Sealed into memory that which is non quantifiable. Non brandable. Not Likeable. That which brings nothing to our lives but the warmth of others, within whose eyes we often reflect our own hearts.

Unfortunately today, with the support of social networking tools such as above, I do believe that we are less. Literally, we have become slaves to egos feeding on the Likes, favourites, re-tweets, re-pins (ad nauseam) of others. Please don’t misunderstand this an argument in support of sovereignty as it is most definitely not. 1) Because I am not a self-involved Russian novelist; and, 2) because I believe that we are defined within the space of our relationships with others both platonic and not. Always, I have fiercely believed that we are both who and how we treat those around us.

Quick hits for egos
Philosophically, I imagine that the above has led to a shift in how we define our own sense of self-worth and value. These tools are making us less because they are a means to instant gratification, reflected in the following three ways. First, our value comes primarily from how we are perceived by others, many of whom do not know the true shape of our hearts, but who are instead given a PR spin on what we wish to represent of ourselves. As example, think about that time that a guy instagram-ed a photo of him beating the sh/t out of his girlfriend, or that time that a 27 year old man took a selfie of himself while he raped his 4 year old step-brother. Do you remember that awesome filter he used? Exactly.

Second, shallow (and completely meaningless) instant gratification becomes our driver and our go-to; by extension should something require work and effort we instead deny its place in our world. Maybe worse is that we become incapable of doing the work required, making the effort needed.

Third, as direct consequence of above (and important only to those of us who believe in God, so skip it if you don’t), it becomes far too easy to no longer place at the center of our actions anything to do with Him, but rather only our need for the shallow instant gratification of others, and ego-fill. This is a far greater and deeper discussion which I have not investigated enough to discuss too freely; rather, I will write only the surface of it for me, which is that ego and instant gratification are not the ways to Him. In fact, they are directly opposed to purification of the self according to absolutely all of the great Faith traditions.

Sidebar on this last point which requires much unpacking not suited to this one article: Again, please do not misunderstand the above as a call to disassociating oneself from the approvals of society. It is an argument in favour of seeking – according to your own moral code – the approval of the best in society.

What’s the fix?
The following is by no means comprehensive, but speaking only for myself, I recently deleted every single person on my Facebook who I do not actually know or to whom I am not connected in some way on an intimate level. There might be a total of 5 Facebook friends who are not in either category, and who I have kept for reasons not of this space’s concern.

Second, I deleted my statistics counter on this site, which used to tell me how many people visit daily, for how long, and for what reason. I have only kept the function which indicates the search terms they used to land on my site.

Third, I deleted the tool at the bottom of each article which shows (both you and I) the number of Facebook Likes per article.

I use Twitter as a tool to streamline the information I seek, and I couldn’t give a sh/t about re-tweets, followers and favourites by others.

I do not have Instagram; I have left Tumblr; Flickr is where I keep my photos as back-up and for re-sizing.

It’s my own wee start. Maybe, if you agree with any of the above, you can find yours too.