May 28, 2014 - Mindful Relationships - Tagged: communication between lovers, how can i trust someone?, shattering trust and recovering, trust, trust between lovers - 15 comments 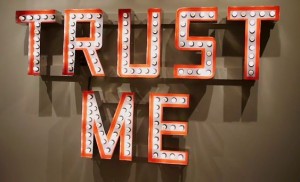 Trust between partners — aside from top-notch sexuals, humour, and respect — is a fundamental pillar in any solid relationship. It is among the few things which, once broken, renders the relationship completely un-salvageable.

So “…how do you build and maintain trust in a new relationship?”

Before answering this, let me tell you a little secret. I HAVE TRUST ISSUES. I yell it because it’s so scary. But there it is.

I remember all too clearly the one time someone took a jackhammer to the trust between us; the very painful moment of clarity wherein I realized that this person standing before me had robbed me of the most sacred thing I have to offer — my trust that they would not turn out to be some kind of a mother f/cker who would take a little poop in the cavity of my heart. It was horrible then, don’t think it’ll ever be comical ‘now’. Because in this individual’s twisted logic, they thought that keeping something from me would make things better. Only. Jesus. That logic is like standing in front of someone, staring at them, covering your eyes and declaring very strongly and loudly that “YOU’RE NOT HERE! I CAN’T SEE YOU! NOT HERE!”

Right. Back to you, my love. Take a pause and remember that time when your trust was broken. Do you remember what happened? For me, it was like the digital numbered screen from The Matrix, only instead of numbers, it was things from the past and present falling into place and building a perfect image of all things I had seen but never connected, until that precise moment. Swear to God, I waited for three days hoping that Keanu Reeves would break through the wall to ask: Red pill or blue pill?

I also remember breaking. Literally, I remember that something broke inside of me when I looked at the trust which had previously existed between us as it lay shattered into a million pieces. That breaking was a reflection of my insides and its accompanying pain. To this day, it is still a struggle for me to extend complete and total trust to a person before me.

But I do. Ferociously, in fact, and just like having a fear of flying and so chucking your ass out of a plane. Don’t misunderstand this as something which is easy for me to do, because it is not. And I am very much like a stunned rabbit on far too many occassions holding my breath, ears perked straight up above my head, maybe taking a little poop, waiting for the other shoe to drop, waiting for the pain of having that trust demeaned.

That said, I still force myself to do it because I’m pretty sure that in order for me to stop trusting people, I would have to — as L-A has said time and again — “grow a shell,” (she purchased for me a turtle because she wanted me to find a shell so that I might protect myself. I continue to refuse) but that would fundamentally change who I am and what I bring to my little 2×4 part of the world with which I have been charged care.

Because I am demented, I have convinced myself that this lack of a shell translates to my welcome-to-me vulnerability and it is this vulnerability which then allows me to feel as ferociously and vividly as I do. The flip-side? It is the reason I shatter. But I’d rather shatter a million times than live a life of ever-safety where I pretend my hurt is impenetrable. Because no one’s hurt is this.

The best thing about both the good and the bad? Crazy and intense living. It is bleeding love and loyalty and gentleness and kindness and anger and rage and honesty. I would be miserable any other way; sad, stupid, dull, living in shades of tan and ecru. F/ck, I am dimmed by the mere thought of this.

So. I trust. And I make myself as trustworthy as possible inside of a relationship. You know how I do this?
I don’t lie. (Arguably, to a fault. I am a walking, talking Clarica commercial because if I misrepresent what’s in my head, I fear that you might not get it, and if you don’t get it, I am the one to blame. So I Clarica. Sometimes more than once. Sorry!)
I don’t hide anything. (Because if what you’re doing isn’t wrong, then why would you hide it? Please don’t be slow in the head and confuse ‘privacy’ — something to which you are entitled when you are having a gas attack in the washroom — with ‘hiding’ stuff from your wo/man. If you still don’t get the difference, email me.)

See how simple that is?
Again, for shits and giggles, I am trustworthy because…

I don’t lie.
I don’t hide anything.
Rinse and repeat because being trustworthy isn’t something you do once, but rather it is proof positive daily. It is a behavioural muscle which becomes a natural extension of your character the more you engage it. Just like a tight bottom.

This is not to say that I don’t have secrets. Because we all have them and we are entitled to have them. Of ago. In the past. Where they can not bleed all over me and my new piece today. If it’s still bleeding all over me today, in the present, it is something about which I will either be lying or the nature of which I may be forced to hide from my new piece. And, uhm…have we already forgotten?
Don’t lie.
Don’t hide anything.

When our new piece trusts us, what they’re really saying is “this heart? My little heart? I have chosen to give this to you. What will you do with it, please and thank you?”

And what we will do is:
Not lie to it.
Not hide anything from it.
Ever.
Never.
Ever.
Full and complete disclosure (because if it’s not out in the sunshine between the two of us, but rather in the shadows with you alone, that’s also the same place that our relationship will go to suffocate and die, but not before it reaches for the laptop to write about its slow painful death).

15 thoughts on “Building and Maintaining Trust”