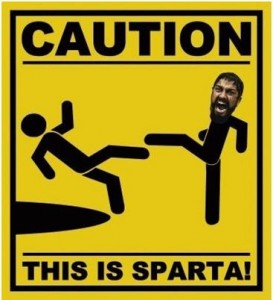 The last time I was officially part of a club was grade 8 Dungeons and Dragons club. I was the only girl; none of us were dating anyone, my crush was on either Don Johnson or Kirk Cameron because I toggled between daddy issues and loving Bible thumpers who didn’t believe in dinosaurs.

I’m bringing this up because people keep telling me to “join a club” so I can meet men and go out on dates.

This advice, by the way, it comes from people who have not been on the dating scene for years. It’s these same people who often tell me to get online and start online dating. Online dating? It’s where sociopaths convene and send you messages like ‘I want you to sit on my face. Hi my name is Tom.’ So, essentially, the only guaranteed place to meet all of the men who will eventually murder you in your sleep.

Just moments ago I was in Hartman’s grocery shopping. By ‘grocery shopping’, I mean I was head-first in the watermelon bin poking around for the largest watermelon and thinking ‘lift with your knees, not with your back, Maha’. When I popped up, proud to have spent 8 minutes of my life looking for the watermelon that was 2.3″ bigger than the rest (I FOUND YOU!), I made eye contact with a beautiful man. Obey sweatshirt, baseball hat on backwards, longish dark hair, body clearly belonging to an athlete (confirmation of this is when the size of their calves match the size of their broad shoulders, by the way). He was like a darker Tim Riggins and I nearly dropped and cracked my watermelon; definitely a euphemism.

For the rest of my time in Hartman’s, we walked past each other smiling. And then we paid at sister cashes. And then I left.

Empty. Nothing but a note to self to go back next Sunday and hang out by the watermelon bin.

On my walk home, I was wondering what I should have done. Should I have asked him to walk my watermelon home for me? Should I have given him my number and risked looking like a lunatic who hands out her number to men in grocery stores and who is Looking For Mr Goodbar? What would you have done? What have you done?

I ask because I have committed myself to officially dating. I have never been a robo-dater, but I don’t feel as though I have much of a choice anymore. I want to sit on the couch and watch tv and movies with a new piece; I want to share secrets with him; I want to poke fun at other people with him; I want him to bring me coffee in bed and eat watermelon with me when I am sad. Why is this such a hard order to fill?

In the past while, I went out on two dates; one an absolute disaster and the other nice but no cigar. On my way home from the former, I was imagining myself Sparta kicking him in the belly and yelling “THIS IS DATING!” which, I mean, it’s not very productive.

Send me your secrets. Tell me where and how you met your piece and which clubs to join. I am officially on the market for an adventure partner.