Iman is the Arabic word for ‘Faith’ 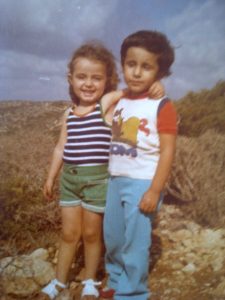 My first boyfriend was Libyan.  Here we are at Jabal al-Akhdar (Green Mountain) picnicking with our families.  Ever arguing over his fetish for jogging pants and how he soiled himself publically, we were doomed.

See, my family is Palestinian though I was born in Libya and raised between there and London before mum and dad scooped me up and brought me to Canada at the age of four .

Islam has taught me: My blood is Palestinian and it is by grace alone that it has not yet been spilled because of this root.

Canada is my home and it’s her culture inside of which I am most comfortable and satiated.  While in Canberra last month, I walked to our embassy’s front doors and noted the etching of maple leaves throughout the stone.  To a girl who is a strong advocate for global citizenship, I found slightly alarming my deeply emotional response to these etchings; to the point of nearly crying, I was swelled with pride , overjoyed to find myself at the front doors of…my home.

Islam has taught me: My blood is Canadian and it is by grace alone that I am not a creepy conservative.

Though this is where my heart lives, there remains a strong mix of both Middle Eastern and North African cultural references to which I am rooted and with which I identify.  More importantly, however, is the resonance of Islam within my world as it is this Faith within which I have chosen to find my own sense of worth and integrity.

Islam echos within me: Your blood is Muslim and it is by grace alone that you have not yet suffered at the hands of ignorance.

In the last few months, I have been reading the news with an unimaginable and uncontrollable sense of loss.  I have been reading all reports of torture in Tunis, Egypt, Bahrain, Yemen, and Syria while the “Muslim” leaders responsible invoked the name of my beloved Allah when addressing the masses.

Islam has taught me: My blood is Tunisian, Egyptian, Bahraini, Yemeni, and Syrian and it is by grace alone that I have not suffered at the hands of such false prophets.

Moments ago, I watched the complete footage of Iman al-Obeidi being violently handled and threatened while trying to communicate to journalists how she was raped by 15 of Qaddafi’s men.  Her face is covered in scratches and she is — rightfully so — in a state of extreme emotional pain.  The Qaddafi regime labelled her a psychotic, a prostitute, and / or a drunk, none of which have stuck.

I watch the video to bear witness, because it is the only thing I have to offer Iman al-Obeidi.  In knowing her story, she is no longer isolated.

Islam has taught me: My blood is Libyan and it is by grace alone that it has not yet been spilled because of this root.

I watch as a woman in hijab is the first to yell at Iman, and is also the first to physically grab her later in the video.  A second woman, also in hijab is who throws a cover over Iman’s face in an attempt to silence her.  I can’t help but wonder why God’s mercy and compassion have not made their way through the veils of these women and into their hearts.

Libyan men join the struggle and shove Iman outside and into a waiting car.  She doesn’t know to where she is being taken and I hadn’t realised that I was crying or holding my breath until my requirement for oxygen kicked in and a million thoughts flooded my head, the most searing of all Allah?  SOS.

11 thoughts on “Iman is the Arabic word for ‘Faith’”