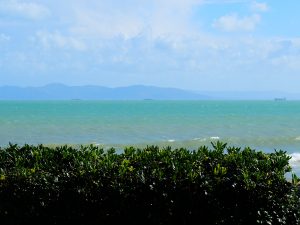 First. The ear situation is fully on the mend. Gauze was removed this morning, and a little more work done by the doc. Though there was some pain, and I had to ask him to stop so I could breathe, it was nothing close to that of three days ago (because I had taken enough ibuprofen to sleep a small elephant).

I am 80% healed, and he is expecting me to be at 100% within the next five days, inshAllah. Thank you for your messages and for not yelling at me because I brought this onto myself. You are really wonderful.

Second. While I’ve read a lot of studies on how the body later quite often mirrors our emotional health and well-being, I’ve not come across much in the opposite way – that our bodies intuitively and previously can mirror emotional situations.

Before you ask me what kind of weed I am smoking in Tunisia, let me explain. I believe everything is related, including intuition.

The best way I can explain this is to ask you if you ever felt something in your body, before you knew it cognitively in your brain. Unless you are a tree-stump, your answer is Yes. [Mind, we now know that trees communicate, so they may be as intuitive (or more) as us.]

Taking this answer, here’s what’s happened in the last two weeks – the two men of 2018 have been exercised fully from my world. Like poison, fully drawn out of my body, followed by complete and total relief.

One of them took a very long time and was extremely drawn out, while the other one was instant.

In these two weeks, two other things happened. First, was a blind-pimple (look’em up. Hate me later) above my right eye the size and likes of which I have never ever seen in my life. It started in Paris and kept growing for two weeks in Tunisia. It. Was. Massive. Larger than a full-sized sweet pea. It kept draining for three days after it erupted (sorry. There is no other word). It is now healed, and I am using vitamin e to avoid a scar.

Those of you who know me know that I get pimples once every few months, if ever. Genetically, I’m good because my skin is dry (, with the trade-off being that I will crack earlier than those who are oily). If you had seen this thing, you would have asked if it was a prosthetic and/or when it was due.

This thing was the long and extremely drawn out but finally done (yahoo!) trauma of last summer.

The second was the ear thing. Instant in appearance, equally quick in it’s disappearance. This, it was the second person.

Honestly. I believe that this wasn’t a coincidence, but rather that my body was reflecting what it knew was about to intuitively happen. (Of course it knew. Because my brain knew, though the knowledge was wilfully buried.)

There’s no one left from 2018, and none since. (Oddly, not even some fella I found attractive because I am so bored by it all.) I don’t anticipate either blind pimples or abscesses anytime soon. Fingers crossed.

Today, I am grateful for:
1. Sissina’s road begun today. No explanation will be shared, however.
2. Rain. It poured in Tunis and it washed clear all of the streets, leaving the white buildings to glitter.
3. Clear skin. I will not fuck with this mojo and ever take it for granted. Shukran ya Allah. Love you kteer.