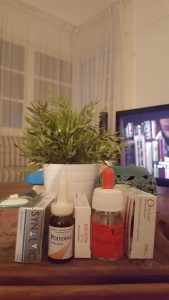 These are the five medications I have to take over the next eight days.

Fun Fact! You can over-clean your ears to the point of creating an abscess.

Guess who did just this very thing?

Now. I have a pretty high threshold for pain tolerance. (And fellas, for reference, women naturally have 9x your threshold tolerance.) The pain of the abscess itself drove me to tears earlier today; the pain of the procedure I had to undergo without anaesthetic saw me nearly pass out.

Swear to God, if I had known what I was in for, I would have asked for a plank of wood on which to bite down. But I had no idea wtf was about to happen until it was too late.

First, I woke up literally lopsided. The side on which there was an infection was swollen to the point where I looked like Mrs. Potatoe Head missing a full ear. (I took one too many selfies because I was fascinated by how much my skin could stretch.)

As the day progressed, the pain increased and I was instructed to not take any pain killers until I saw the specialist. THAT WAS FUN. So, not only would I not be under any anesthetic, but I didn’t have any ibuprofen coursing through my body whatsoever.

By the way, I was also told that the swelling might be an indication that I had a perforated eardrum, leaving my “brain exposed”. MORE FUN FOR ME SO MUCH FUN WAITING UNTIL MY 5PM APPOINTMENT WONDERING IF MY BRAIN WAS PEEKABOO!

Let the record show that the doctors in my family may not have the greatest bedside manner with their own family.

5.05 pm on the nose, a little boy was inside the specialist’s office wailing. I distinctly thought this might be me in 20 minutes.

I
Was
Not
Wrong

At 5.20 pm, I was breathing heavily through tears when the nurse walked me into his office. I fell to pieces in his chair and when he asked me why I use q-tips, I said “Because I am a donkey”.

Here’s what he did –
A) With microscopic instruments, he looked into the swollen ear to determine wtf was up. The insertion of these little instruments was what began the nausea, but showed it was an abscess.
B) He then squirted either high pressure air or water into my ear canal to clear it, and shoved more microscopic instruments inside. I do not over-exaggerate when I write that it felt as though he had taken a sword and was slicing the inside of my ear repeatedly, and reaching middle-brain.
C) With two different thicknesses of needle, and a blade, he sliced the abscess open.
D) He used a wick to deliver antibiotic deep into the ear, and to make me more nauteous.
E) He placed gauze into my ear, with more ointment. The gauze, he will remove on Saturday morning and not a moment before.
F) He closed the extravaganza by giving me a needle in my bottom.

Here’s what I did –
A) Sobbed. Because I was being sliced open while fully awake and aware.
B) Nearly tore Sissina’s hands off her body, because she was standing in front of me holding my hands and telling me to breathe, and reciting al-faatiha because she was witness to what he was doing to my ear WITHOUT ANAESTHETIC.
C) Certainly making noises like a hysterical and dying cheetah, while trying to breathe because the pain was so fucking intense and overwhelming.

I was so discombobulated by the time we left that I actually rolled the window up against my nose, and nearly took it off because I didn’t think to move my face 10 mm back.

How was your day?

Today, I am grateful for:
1. Being in Tunis when this happened. Here, there is trusted healthcare by Canadian standards; and, more importantly, Sissina to literally breathe through this with me.
2. Excellent ENTs who are available same day, and who work extraordinarily fast so that through all of the pain, you simply experience it rather than think about the agony of what’s about to happen next.
3. That I have means and access to health care. AlhamduliLah.