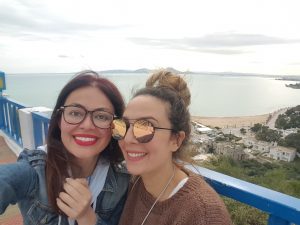 Before he went to sleep tonight, Fares came into my (his) room and asked for a kiss and hug goodnight. He hovered and gingerly asked When will I see you again after you leave tomorrow? 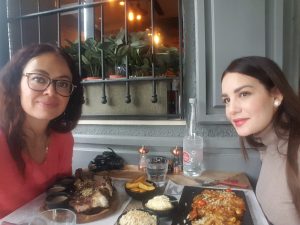 I had been at the kitchen sink earlier today, looking through their window watching birds and thinking how it had been ten years since I had seen them. It was for Sireen’s wedding, and years before she would become a mother. The top photo is with her, the second with Azza. This thought hatched a more simple second one that would later be reflected in Fares’ question – Will it be another ten years before I see them again? Without much awareness, I found myself washing dishes with salt-water, taps turned off.

When Fares asked me his question, my heart slumped again and grew as heavy as my tongue. Instead of answering him with half-truths, I simply asked for the warmth of another hug.

I have been here a month, two full weeks longer than intended. My time here has been bittersweet these last two weeks. There has been some illness, not just my own, and there have been some necessary emotional upheavals. The man from the summer re-entered my life for a brief ten day period, nine days longer than he had ever earned or deserved.

These days were necessary for me to confirm that I had made the right decision in September; I had. Interesting that such confirmation did not bring with it any kind of painful emotional turmoil, but rather a calm which has eluded me since September.

Tunis brought with it complete healing, and effortless forgiveness. (Mind, this does not mean he is in my life in even a friendly capacity, as he is not. He is in the past and no longer able or welcome to be in touch.) There is only left a scar and, finally, emotional real estate freed up.

Today, I am grateful for:
1. That a tumble down the stairs only left me with a bruise, and not a break.
2. The safety, love, and kindness of other women.
3. The hugs and kisses of Fares, which come with neither armour nor hesitation.