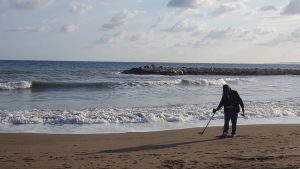 I watched a man with a metal detector go over every grain of sand for an hour, covering perhaps 20 meters of this vast coast. Billions of grains of nothing, hoping to find a nugget of treasure. Like me, in fact.

I had been praying for clarity, still. Daily, I have been asking Allah Is there any little bit of goodness left in this man?, a reason to accept that my love for him had not been a complete waste.

Beneath a multiplicity of reasons, each one uglier than the one before, I had continued to search for one good reason to have care and kindness for him. Because I wish to believe, to the core of me, that there is goodness in everyone.

When I woke up, I had my answer like a fucking kick in the face, in the shape of a WhatsApp message and a photo sent at 230am his time. When he is so drunk and cranked on cocaine, Valium and Adderall, there are no boundaries.

He proved only that he has always been a loser, nothing more than a sad, performative Muslim.

It has not been an easy day, but it was a necessary one. And now my contact list is short by two names and numbers (his US and his Istanbul phones), though heavier two blocked ones.

Again, I will keep reminding myself that this too, it shall pass.

Today, I am grateful for:
1. Accepting that I do not need a man to speak for me. Earlier today, and back in Aug / Sept, I had wanted and prayed for a man to speak for me. In Arabic, the concept is ‘masnooda’, which means that we are supported. In a more literal sense, it means that someone has our back. No one would step in and speak for me then and I was too broken to push. Today, I asked. And then I realized that my voice is stronger than any man’s. And men, they always make excuses for one another don’t they? We see it daily when we look at the #MeToo movement. Men who see the filth of their friends and simply shrug, while continuing to support them, still being their friends, making themselves as filthy as the men they protect. Men sending the message to other men that There are no repercussions to your bad behaviour. So today, after the violation of his messages, I decided that I was fucking done with #ALLMEN, and chose instead to dismiss their voices and use my own, to its greatest damage possible. I allowed it to be made of razor-blades and acid. But then I toned it down, removing the sentiments that would go for hia jugular – only out of my love for Allah. I rarely give myself the space to indulge this part of me which I know can smash every nerve ending in front of it, and then pour gasoline on these very nerve endings before lighting them on fire. You couldn’t have possibly thought that this much empathy doesn’t have a flip and dark side, did you, friends?
2. Isabelle, of Paris-Plage. I go there not for the food or excellent coffee, but rather because she reminds me of my most precious girlfriends. She is full of fire, and today, after this heaviness, after feeling so alone and disconnected, I made a point of telling her as much. Simply being around her energy and fire reminds me of my own.
3. Reem and Omar, my cousin and her husband. Thank you for everything, but especially for not leaving me alone today.

One thought on “The Treasure Hunter”