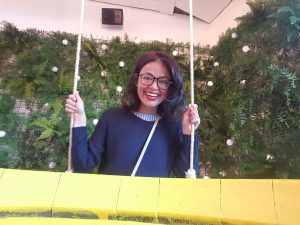 From the second I looked at my phone this morning, nothing today went as planned. Unfortunately, being a glutton for punishment, I decided to go out anyway and make certain that every plan fell apart.

But I did find a brand new restaurant WITH ONE SWING AS ONE SEAT. Even if a child had been occupying this swing, I would have pushed it off to swing myself instead.

Rather than giving you a rundown of today’s lameness, let me instead tell you about my favourite moment outside of the swing find.

Along the boardwalk in our neighbourhood, there are musicians who set-up a background soundtrack to which they then add the main instrument. My favourite is the saxophone man, whose tracks we now know by heart.

While I ate a late lunch today, he was playing. When track #2 came on, MY FAVOURITE SONG, a gentleman at the table next to me started swaying and clapping. I was mesmerized, because I had never thought of this song as a swaying/clapping experience. I joined in to taste this flavour and let me tell you, it is delicious and it is indeed a clappy/sway-ee song. 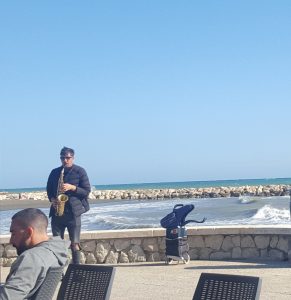 Careless Whisper sounded better today than any other day ever before.

Today, I am grateful for:
1. An afternoon spent finalizing and approving the inner pages of rose-water syrup, sending bio, and photo. All that’s left is the cover.
2. The salt & pepper haired gentleman, beautiful and easily in his 50s whose paths I crossed twice along the boardwalk. The first time, I was greeted with a polite smile, but the second, he took off his sunglasses, inclined his head and greeted me as though I were an old friend. His eyes are green, and he made me blush. It’s been a while. Thank you.
3. Gambas al pil-pil. Spaniards don’t spice their cuisine, so this dish – prawns in oil, garlic and hot pepper – is a grateful find for a girl who would add Thai pepper to her crėme caramel.