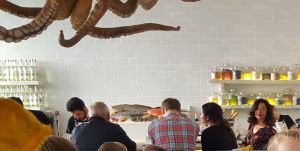 That’s me in the corner. Neither in the spotlight, nor losing my religion. The only person with whom I am trying to keep up? Myself.

Yesterday was hijacked by my finding out that rose-water syrup was live for pre-order. Your girl is officially on places like Amazon and GoodReads, and I will never not be over the moon about this. Like I wrote yesterday, I just wanted to hug it out, but had no one. (Mind, the virtual love that continues to come in over the wire is enough to light up a skyscraper so I have nothing but gratitude.)

Instead of receiving hugs, I decided to give myself one instead. Something had been on my mind since the torrential downpour in Cascais. Namely, that I walked past a merry-go-round and didn’t get on it. For those of you who have read / known me long enough, you know that I have a promise to myself to always get on the merry-go-round, no matter if I am the only one, or the only adult among children, no matter my age. The Cascais merry-go-round went un-ridden because I was soaked to the bone, and it has been on my mind since.

I woke up this morning intent that for my last day in this beautiful city, I would leave it and go back to Cascais to ride this merry-go-round. So much intention here that I left the apartment without putting on my red lips. One hour going, and one hour coming. My time was well-spent; my heart is full. 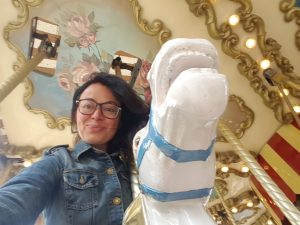 Back to my yesterday, which I didn’t have a chance to share. My plan had been to go to the MAAT. Sadly, after walking for an hour and 15 minutes, I found it to be as sealed as a tin of sardines. Staring at my bob-shaped-into-a-mohawk at the hands of insane winds, the security guard quietly informed me that We close every Tuesday. Again, how I have made it five months without falling into the sea, I will never know. Plans mangled, I instead visited the National Museum of Contemporary Art and was entirely underwhelmed. Perhaps this had to do with my hair getting caught in each doorway through which I tried to pass, but after the Berardo, I think that any art showcasing would have struggled in comparison.

That too being a slight disappointment, I am very pleased to report that my day ended in culinary heaven. 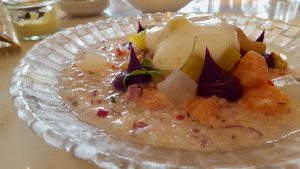 We ate here nightly in 2015, when it was simply the cool and super tasty ceviche place around the way from our apartment. Since then, it has received Michelin certification, and it is the first stop I recommend when anyone comes to Lisbon. That is their salmon ceviche, with lychee, coconut milk, tiger’s milk, cashews, tapioca, and all of the lime you can handle. Actually, heaven. Officially, salmon has replaced tuna as my favourite raw and/or cured fish.

My tummy full, it was the perfect end to my five months away from Canada.

Today, I am grateful for:
1. Not getting caught in the rain. The week’s forecast called for approximately 15 ml today and yesterday, and 5 the day before that. I missed all of it, though enjoyed it’s song from inside of the apartment.
2. Merry-go-rounds and adults standing on the sides who watch and wave at those of us on the ride. Today, it was myself and one other little girl. I got all of the waves. I win.
3. Again, my health. Every single day, my health, and the blessing and honour to age (at all, but most especially to do so) while still remaining healthy.