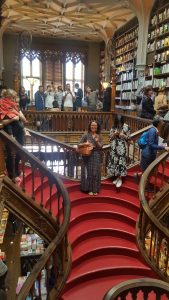 Because I don’t know how photography happens, here I am waving at you from one of the oldest bookstores in the world. Livraria Lello (R. das Carmelitas 144) is said to be one of the inspirations for Harry Potter prior to J.K. introducing all characters to hep spread by the sexing,  a reality easy enough to visualize the moment you walk into the bookstore.

It was gorgeous. I spent about 90 minutes inside this tiny space for three reasons. First, because I could barely move and had to be careful not to have my face smashed by an elbow coming down after the owner of the elbow finished taking a photo. Second, because I became an immovable object whilst staring at those who were pretending to read, so that they could have their photos taken; each of these individuals were having their photographs taken with long lenses, and left without purchasing a book (as a bibliophile and a creep, I followed them). Finally, because the english selection of books is total garbage, I was forced to comb through every single english title to find one I could, in good faith, purchase. I opted against Kim Kardashian’s Marriage, and the several L. Ron Hubbard books, finally landing on Alice In Wonderland, apropos this sojourn, as it was the best available.

Another day spent winding through the streets of Porto, two favourite moments come to mind. First, was that I got on the ferris wheel. This is important because I was the only one on it, and they ran it anyway. Because I am Canadian, I spent twenty seven seconds being upset about this waste of energy, and then pretended I didn’t notice anything was amiss. In all honesty, I was very excited, and then nauseous upon disembarking because it was spinning a little faster than one might expect. (The price for wasting energy, God yelled.) 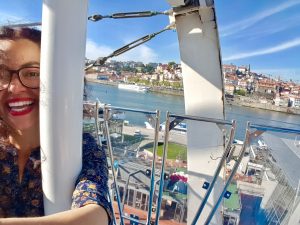 Second, I got a photo of a nonna. If you look up while walking, you will find at least one nonna per block hanging out her window people-watching. They are really a site for sore eyes, and as Azooza put it ‘If I had the blessing to grow old in my own country without having to immigrate, I would also be watching my streets all day long’. While walking along the river, we spotted a nonna and tried to take her photo, but she was too wily and almost vanished entirely, but I did manage the following, at which you need to peek the upper right-hand side window – 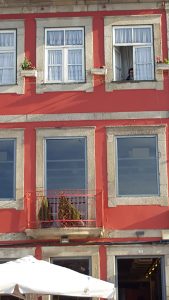 Last and greatest today moment was when we had dinner at a local mom n pop joint, fully Portuguese. We sat beneath the television, next to two older women who were also there for dinner, and to watch Portugal’s The Price Is Right. They were so into the show, talking at the television and then turning to one another in disgust when a contestant made the wrong choice, I was riveted.

Honestly, I want everything about their life ❤

Today, I am grateful for:
1. When beloveds see things on instagram and inbox them to me. It’s the modern-day equivalent of ripping out articles from magazines and placing them in the mail, something I did up until maybe five years ago. It signals “I am thinking of you,” and is a hug across waters. Thank you to those of you who do this on the regular; it means more to me than you know.
2. Mom n pop joints anywhere in the world. You have the best food and the warmest smiles.
3. All of the nonnas hangin’ from their windows people watching. I don’t mind tripping along the cobblestones because I am admiring you.