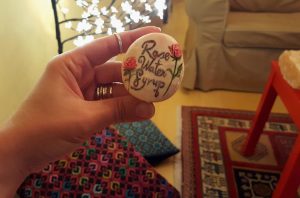 It’s a homemade macaron, raspberry flavoured. Beautiful, isn’t it? It tasted as good as it looks (even with reduced sugar), thank you to my little Ranoosh.

It’s odd to be home. I tried to integrate a small part of my former routine into my morning by starting my day off at my coffee shop (where I was greeted by a warm hug, and a wildly handsome man. Unfortunately, the two were not from the same individual). I would be lying if I told you that it went as usual, because it didn’t at all. If anything, it felt relatively uncomfortable to look around and feel both as an observer, and disconnected. Like the concept of time, feelings seem to work the same way; everything felt the same, yet nothing felt right or familiar. Seven months ago, every crack on the streets of this neighbourhood felt like home, a part of my personal landscape and identity. But not anymore.

I’m not entirely certain I understand what’s going on inside of my pebble-head. Only that being home suddenly feels – for lack of a better word – aimless. I took a quick spin around my neighbourhood because I needed to purchase a small canvas, and noticed that three shops had closed, while one restaurant, and one coffee shop had opened.

This really is how quickly things shift, isn’t it, I thought to myself. (What a weird expression. To whom in the hell else are we going to think?)

In one second, our world shifts exponentially. And while I feel like there is years between me and seven months ago, I don’t feel as though I have made progress or changed. Instead, I feel stagnant.

Incredible, right? Incredible because I am absolutely not the same individual, but rather now with a book soon to be released, with five months of travel, a healed heart filled with insane gratitude that it was chucked from that situation, a haircut, a calmer demeanor (I SWEAR!), a deeper faith, greater courage, gratitude out of my ass, etc. ad infinitum.

Let me caveat the disclosure of my little secret by saying that I believe there comes a time when we cannot grow alone. Meaning, I cannot grow as a friend, unless I am interacting with friends and learning and reshaping my behaviours. I cannot grow into vulnerability, unless I am engaging another and opening myself up to the possibility of hurt. Keeping this in mind then, and turning to my little secret? I am struggling to see anything outside of commitment / marriage, as growth, because I am looking to grow romantically.

Basically, I am Jerry McGuire staring into the abyss and waiting to tell some random man you complete me.

Which isn’t a problem. Because return to the caveat, please and thank you. Sitting quietly alone and learning the theory of law can only take us so far. At some point, I have to article in order for me to grow. The problem? It is that I have lost sight of all of my other growth, I have discarded it, belittled it, set it aside as though it is of no or of lesser value.

What a disservice to myself. One which, now that I have recognized it, I can challenge it when it creeps up and ambushes me. Simply, there’s nothing wrong for wanting for growth romantically, while equally recognizing and valuing all other growth happening at present.

Today, I am grateful for:
1. That it didn’t rain today! Because it snowed instead.
2. Receiving the advice of reader-friends. It seems that I am not permitted to cut out salt, so I will heed all advice and merely cut back on it.
3. The continued purge. I only purged three cabinets today, in my mind. Meaning, I stared at three open cabinets, and decided which items I will be donating. Now I need to start filling boxes.