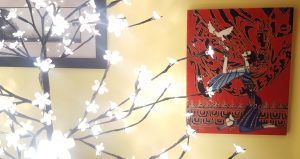 It was a manic evening yesterday, starting around 9pm, and carrying into today. Thank God I had a 23.5 kg bag to unload, and organize last night.

I woke up at 7.30, and though I tried to drop down a couple of gears, it was impossible. The closest I got was keeping my tree lit up all day, and for a moment, sitting to reflect on Billy Joel’s Tell Her About It with coffee in hand. (Has anyone listened to him lately? An Innocent Man is one of my all-favourite albums, fyi. I think he’s genius.)

After being a proper Canadian who files her taxes while jet lagged (HI CRA!! CALL ME!!), I spent the day purging. I unloaded two washrooms, and three cabinets so that I might throw away what needs chucking, and begin a new donation pile for what needs donating.

I want to throw away my apartment and start anew.

I have no explanation for this, rather only a possible hypothesis of needing to start fresh. I love The Cloud Cave, but I am feeling overwhelmed by it and all its contents. Wild this, because I am always, on the regular, donating everything I notice I haven’t used for any extended period of time.

The Cloud Cave needs lightening, as equally as I, I think. Having not spent one night here since seven months back, I feel as though I need to clear (metaphorical) cobwebs. This time, it is at a level unprecedented. I’m grateful that certain things – such as the microwave – are bolted down.

That aside, two new and exciting decisions made last week and being followed as closely as possible, though not like a fundamentalist – I have cut both sugar and salt. Sugar isn’t such a big burden to cut, because I don’t add it to anything, and rarely have pre-packaged foods. It’s the salt that will haunt me, the one who adds salt to pizza and does so before she even tastes it.

I wrote that in the 3rd person because I want to disassociate myself from that weirdo. Pizza, y’all. And, ohmygod, McDonald’s cheeseburgers (with extra ketchup, onions, and pickles, please and thank you). If I go missing, you’ll know that it’s because my preservative has completely depleted.

Today, I am grateful for:
1. Turbo Tax, even though it is a nightmare to try and dl a pdf copy of my tax return after I’ve filed and signed out.
2. The videos of Baby Nassir-Eldin which have my mother watching them on a loop, and laughing.
3. Dates, God’s natural sweethearts. When a sugar craving hits, dates will always hit the spot.