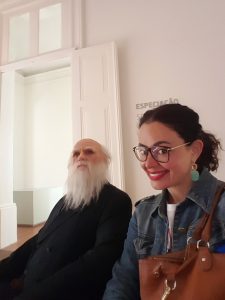 That’s Darwin. He had rabbits in his lap, and he was watching several screens about science things. I can’t tell you what, precisely, because I was too busy taking selfies and sitting on my hands so that I wouldn’t touch his hair. Do you think it was real hair? It looked real.

The chucks that were soaked last week in Cascais were finally completely dry yesterday. I didn’t wear them today only because I hadn’t yet laced them. This morning, I had considered doing so, which (considering how things orbit in my world) should have been my clue to take my busted umbrella when I left our apartment.

Momma loves gardens, and she has placed that love in me. Odd this because I hate insects and things which crawl and gardens are filled with both. Because of this love of hers, I will go to any botanical garden I come across just to send her photos. Which is what I did today.

Naturally, because this is an outdoor activity implicating yours truly, it began to rain very hard. Recall, I did not have an umbrella. Lucky for me, the botanical gardens (Rua do Campo Alegre 1191), owned by Porto University, had an indoor exhibition about biodiversity which was excellent but for one minor…detail. Two floors of education meets imagination meets science; I was very impressed and read every single thing written next to every one of the exhibits except while sitting next to Darwin. (95% well done, Porto U team!)

The only thing which I found very creepy, though perhaps not so much considering the history of Europe? A booth wherein your photo is taken, and you’re asked to identify your ethnicity from only three options – African, Asian, European. From there, you choose to which of the other two ethnicities (or both), you would like for the software to turn your face. Now, because t entails having my photo taken, I of course I did it. Here I am as an ‘African’.

I mean. At least they didn’t give me blackface? I’m really struggling because if I begin writing about how weirdly racist and eugenics-shit this is, I won’t be able to stop.

Which is why I’ll move on. Lucky me, I began with the indoor exhibit, so missed the beginning of the rains (“…down in Aaaaafrica,” as per above straight-up non-sciency yet racist situation). When I was ready to hit the gardens, one of the curators told me I could find umbrellas at “The Chinese Store” (TCS) five minutes away. TCS, by the way, is what both the Spaniards and the Portuguese call dollar stores. I’m sure they think the Asian / African / European booth is a swell idea. With jean jacket over head, I bumped down to TCS, and purchased a small umbrella as well as A PLASTIC SEE-THROUGH PANCHO.

Sidebar: In case you feel that an umbrella and A PLASTIC SEE-THROUGH PANCHO combination might be overkill, do note that I considered buying rain boots as well, but ultimately Nope’d my own brain. Further, on my way home, I walked past an elderly woman who was walking with a cane, and without an umbrella. I went back to her to ask if she wanted my umbrella, but she declined. Which means it wasn’t overkill, because its potential did exist beyond my dry hair and shoes.

I ALL CAPS because I really love my A PLASTIC SEE-THROUGH PANCHO. The moment I put it on, it broke the wind and the rain and I am bringing this thing back to Canada with me. Every over-jacket should be in the shape of a pancho, in my opinion. In fact, I am still wearing it as I sit on my bed and write.

By the way, the gardens are directly across the street from the money’d neighbourhood we ran through two days back, and all over which were the beautiful blossomed camellias (thank you to both Rachel & Laugh Track for correctly identifying the trees). That entire neighbourhood was covered in these same trees; is it possible that spores from the botanical gardens populated the area so beautifully, Science Nerds?

Photos of the botanicals over on this way.

Today, I am grateful for:
1. Sonny Bill Williams. Not only does he do Islam proud, he is proof positive that exceptional men are out there in the wild. Shukran, akh.
2. A PLASTIC SEE-THROUGH PANCHO. Obviously.
3. Electricity. Keeping us nice and cozy, I don’t take for granted what others wish they could access on this rainy and cold day in Porto.