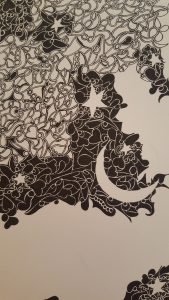 Shortly after completing my Masters degree, I was standing in front of the lecture hall in Southam, speaking to one of my former academic advisors, one of my favourites. A very young woman approached, and when he introduced me to her, she was very happy to meet Maha, about whom he, her favourite professor, had told her about. Innocently, she mentioned that I was a friend of her sister’s.

Her sister, a hijabi, and so taken as some sort of beacon of truth, was a back-biter of the worst kind. She was like a spider, who lied about people in order to manipulate those to whom she was telling her lies. She had willfully inflicted great social stress in my life and had exiled me from our group of friends.

In short, she had a crush on a man. In order to get close to him, she lied and told him that I said his sister had a baby out of wedlock. Are you laughing? I am now, but was not then, because he tore a strip off both myself and my mother. And when I said I would pick her ass up and bring her to his home, sit her in front of him and his mother to see who was telling the truth, he refused. Then he, hypocrite, recited some sad line from the Qur’an about how I am damned. And when he spoke to my mother, he told her she didn’t know how to place tarbyah or addab in her daughter.

In less than a year, she had sewn so much discord between the remaining people in this group that the group would implode. Since this incident, the man’s mother has apologized to my mother because they discovered that I had never said these things. And he, I ran into him on the street a few years ago and HE ASKED ME OUT FOR A DRINK. I nearly spit in his face, but instead politely declined, said my salaams and left without looking back.

When the young woman very excitedly, almost like a little puppy dog, exclaimed ‘You’re friends with my sister XYZ!!’ I responded with extreme rudeness. Arrogance, too. I said Your sister is no friend of mine; she is not a woman who is welcome at my table. Don’t ever call me your sister’s friend. I remember it like it was yesterday. The girl, totally innocent of the wrong-doing that her sister committed, was taken aback. She was shocked, humiliated, and almost in tears before leaving.

I was reprimanded by my professor, but I was too arrogant to accept what he said and brushed him off by saying he had no idea what I went through.

Nearly 20 years ago, and I still remember how proud of myself I was for this behaviour.

Holding someone not responsible for something, responsible. And then being rude and haughty about it. I thought I was so clever and ‘strong’ for being mean to someone who had done nothing wrong to me. Someone over whom I was already at an advantage because I was an academic elder and revered according to what my professor had sung about me. This is shameful behaviour.

I was presented with the opportunity to be kind, and to use higher intelligence. Instead, I chose ugliness.

I have been thinking about this all day. I hope that the woman has since forgiven me for my foolishness. And equally, I hope that her sister has grown into a woman who covers her tongue as much as she does her hair. May Allah forgive us all.

Today, I am grateful for:
1. Fatoosh. LEGIT MY FAVOURITE RAMADAN FOOD SO MUCH ALL-CAPS. (Recipe: 1 large beefsteak tomato, 1/2 english cucumber, 1/2 onion, and 20 sprigs of fresh dill, finely diced. 3 tablespoons (or more) of crushed sweet mint, 1 tbsp tahini, 3 tbsp olive oil, juice from 1/2 lemon, salt to taste. 3/4 of a large pita bread cut into very small pieces. Mix everything together and let sit for a while. FEAST.)
2. Art. The image you see is of my canvas, all of the outlined shapes I will eventually fill in with black ink. While listening to CDs, I will focus on what I am hearing, by working this piece. (Fun Fact: Doodling relieves stress and improves focus. Source: The “thinking” benefits of doodling, Harvard Medical School.)
3. My time with my parents. There will be a time when they are no longer here, and I will wish I had spent more time with them. Don’t wait until mother’s day or father’s day to honour them.