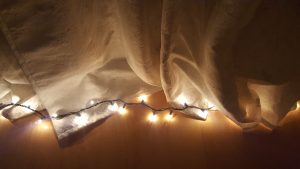 When trying to find peace and calm inside of The Cloud Cave, this is what surrounds me – white lights, on the ground and on my small indoor tree. The only other light comes from a salt lamp in my bedroom which is lit 24 hours a day.

Recall the man of last summer, whom I had forgiven until, out of the blue, he did a thing in March? A truly awful and grotesque thing, so impossible to comprehend and so vile that I could not even write about it? When he has crossed my mind, I have merely recoiled at his memory; this, something I continue to do, because the memory of him has been completely replaced by the events in March. I have not been able to forgive him, and during Ramadan especially, I had hoped to forgive him but sort of resigned myself to an inability to do so because, well, March and his vileness displayed then.

I was on my prayer mat tonight, one of the last ten days in Ramadan, the most important days, in fact. I haven’t thought of him in some time but after finishing prayer, I was on my mat staring at my white lights, thinking of those for whom I would like to make du’aa’. He came to mind, to my own surprise. And the violent reaction I used to have to his memory didn’t show up. Not even when I went searching for it inside of my head.

Instead, there was nothing. No feelings, no emotions, neither good nor bad. Merely a blank space and some pity.

So I made du’aa’ for him, asking only that one day, he become worthy of his two daughters.

Fascinating thing how we process even when we are not thinking about a thing. I can’t help but think that this healing of the emotional cuts is like that of physical ones; when we stop picking at them, they simply heal themselves.

Remember, the less we pick, the less of a scar remains.

Today, I am grateful for:
1. Rain, to wash away all things inside and outside.
2. Our ankles. Thanks for making certain we are able to in fact walk, rather than hop. Which, of course means that I must also be grateful for…
3. Our knees, because they work so nicely with our ankles to make certain our strides are (generally) not bad to watch. Stop for a moment and imagine your movements if we didn’t have hinges at our ankles and feet. From a mechanical perspective, when inspected from scratch, without missing something or having an extra of another thing, the human body is literally, individually, perfectly calibrated as a whole.