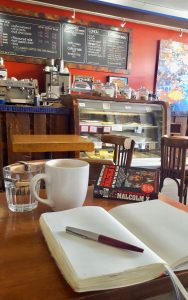 Something which hasn’t happened in months woke me this morning at 9am. Anxiety. Arch Nemesis, popping up unexpectedly and attempting to take me down.

I had a slightly uneasy weekend, beginning Friday. I know what set it off, but this setting off needed to happen sooner or later and so I bit the bullet and actively made it sooner. I knew I would be dealing with a little reverberation, but in the absence of this experience before, I wasn’t certain what I might be in for. AlhamduliLah, things weren’t as bad as perhaps they might have been had I not been studying Purification of the Heart these last 2.5 weeks.

This morning’s anxiety was unrelated to Friday. But feelings don’t separate, and most women specifically, studies show repeatedly, we don’t separate. When one thing goes down, it is a domino effect to all things for most of us. Feeling bad about work? You’ll suddenly feel the same way about your personal relationship. Feeling bad about your used / unused / undecided uterus? You’ll suddenly feel bad about how you look behind that desk. etc it sucks etc.

I did what I usually do – prayer – while lying in bed, but when I finally moved out, I sat quietly and reflected on what I have been learning these past 2.5 weeks. Namely, the present in which this thing that woke me doesn’t exist. And it may never come to pass. Also, that my worries are about dunya, when I am, from the angle, really, from which came the anxiety, I am all good, alhamduliLah.

Because I woke up like this, was only able to tuck away 90% of that anxiety, and continue to shadowbox with the 10%, it was easier for me to fall into stir crazy

Which, have I mentioned? It’s very easy to go stir crazy during Ramadan. My days are spent simply, as follows, and in this order: pray, study/reflect, break fast, decaf coffee, study/reflect, write, suhoor (eat a little bite, have a little water, do a little dance, no romance, right before dawn, when fasting begins), pray, sleep. Repeat.

I always forget that usually half-way into the month, fatigue kicks in and (for me, at least) increases as the month moves forward; effects of lack of sleep, lack of hydration, lack of routine eating habits (healthy or not) are cumulative.

Further, the social schedule of most Muslims changes. While some spend the better part of their night performing a special form of prayers only done in Ramadan, tarawih, which have as intention the complete reading of the Qu’ran across the span of the month (usually at mosque), I spend more time alone reflecting and studying. And as Poppy said just today, I “Maha” this as I do all things; meaning, I tackle the thing with intense focus.

Having come off of five months of 5 to 7 hour walks daily, my body officially hit stir crazy at some point in the last 48 hours. Finally, I made it out on my own and did what I like to do which is decaf coffee, journal, and read. I managed a solid walk and time in my park, even though it was a little windy.

Having taken the edge off the fatigue and diminished the stir crazy, I’ve aimed to spend as much of my daylight outside as possible, until Eid sorts. Nights will be for studying, sunlight for reflecting. InshAllah this eases the last two weeks.

Today, I am grateful for:
1. Martin. He is Jilly’s husband, and he is one of my favourite men in the entire world. A truly stand-up and honourable man, the character of which is so rare. Today is his birthday. ❤️
2. John Wick, Chapter 2. Tonight, after posting this, I am re-watching it to continue my day of no thinking.
3. White fairy lights. They are all over The Cloud Cave, and presently lit up. Thank you for making everything feel and look better. You’re great!