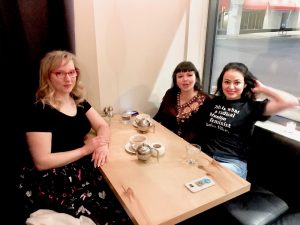 Julie and Aalya, the most committed hardcore feminists I know. From whom I learn something critical every single time we connect. I have gotten into the habit of wearing a little bit of a uniform for our dinners – always, it is some sort of message on a t-shirt, and with my newest pair of insane hells. Tonight, I was in my This is what a radical Muslim feminist looks like tee, and my mermaid sequined stilettos. (Shout out to the lovely young woman of colour at Gezellig who was very complimentary about my tee and heels combo both in look and message.)

Please let the record show that these women, both educators, walk their talk. They are not performative feminists, of whom we are surrounded.

We’ve each lived different forms of hell this year, but theirs was of far greater challenge than mine, because I was getting over a broken man. And mine was so long ago that it is now told like a comedy show. There’s absolutely no pain left to speak of, only comedy-level-insanity. So my story, it was the lightest and funniest to share, which inshAllah lifted a little bit of both of their pain. All I will say about their experiences are that I have known both of these women intimately for years, and nothing said about them was correct. It was surreal to hear about their stories tonight, especially Julie’s because she is such an extraordinary force of good.

She is also a force of straight-up hilarity. When together, it’s just actual out loud guffaws, belly-laughs, and cackles. No one can come near us. Add Aalya to the mix, and it’s over. At one point this evening, I said You won’t literally believe what I received. Like, NOTHING you can imagine will come close to what’s actually real.

Of course, both of them having seen and engaged the complete hellscape that is humanity, shrugged and really didn’t believe me. Until I turned my phone towards them. Aalya looked like she might cry and Julie’s eyeballs were practically out of her head. And then we started to cackle, just short of complete and total hysteria, to which Julie said: There’s rock-bottom. You really think you’ve hit rock-bottom. I thought we knew rock-bottom, but suddenly, this. This. He just knocked on the ground of rock-bottom and we looked down and there he was looking up at us from beneath rock-bottom.

And of course, because she’s Julie, she was miming as she was making this observation.

Today, I am grateful for:
1. Safe-spaces. Aalya and Julie are, by definition, safe-spaces. They fight the good and righteous fight on the daily, and it is truly an honour to call them allies.
2. Excellent lighting. Because Gezellig, while your food and service was FANTASTIC, we really need to do something about that lighting. (Best salmon I have had in any restaurant.)
3. Laughter. Tonight, though there was some real trauma laid bare, especially and way more so for these two women, we laughed. I will not lie; it was mostly at the Beneath Rock-Bottom Dweller. (Julie! I HAVE OFFICIALLY ANOINTED!!!!)