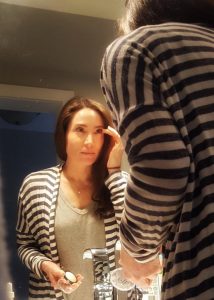 It isn’t Lucy Liu. It’s Poppy, or as I occasionally refer to her – Popsie, or Bob. Can you guess which one of these is my favourite? There are two women at whose homes I am often sat on the ground, and Poppy is one of them. Right outside of her washroom, there is a small piece of property flanked by the washroom itself, two bedrooms and a set of stairs. I am often sat on this property chatting while Bob’s in the washroom getting ready, as she is in this photo. I think I’ll take a flag next I go and plant it in this piece of property. It’s kind of my favourite nook, and it’s where we seem to have the meatiest conversations.

You know how yesterday I mentioned the belly-laughs with Aalya & Julie? With Bob, it’s straight cackling at the absolute worst and most inappropriate jokes. One thing which I’ve always admired about this woman, but have never actually told her, is that she has never once gossiped about anyone. I pay attention to this kind of thing because I find it pretty foul. Not once. This is not to say we won’t discuss someone who has mistreated us, but the idea of just randomly gossiping about people for the sake of deriving pleasure? Never. Ever.

This is one of the many things I love and admire about her.

Though Popsie and me are not above frivolous conversation, we more often deep-dive. Among today’s conversation topics was what I have learned since beginning of Ramadan. Both her and me are only-daughters, and so many things which bind us from this reality alone. Momma’s currently at mine, and I am loving every second of it; it’s really been so much fun for me to have her in The Cloud Cave.

One of the things which I’ve learnt from the Purification of the Heart CD set is the necessity of paying attention to our intentions, as we reflect them in every one of our actions, from what we say to how we say it. One thing I realized I did is when momma might ask me for something, I would say Yes, but I would sometimes (not often, inshAllah) use a particular tone, or puff air from my mouth like an asshole baby dragon, denoting that though I am saying Yes, I am in fact feeling Nope. It’s a wilful and intentional signal of my displeasure.

It feels right. I feel more calm inside of the slowness and attention given to the intentions behind every thought and every action. alhamduliLah.

I intend to write a wrap-up of the CD set within the next couple of days because it can be distilled from both a secular and a religion-based approach, and it’s information and awareness about the self very much worth having.

Today, I am grateful for:
1. Bob. She was one of the few with whom I spoke on the phone while away for the five months.
2. Mary. MARY! Mary who was the first to receive rose-water syrup, and who posted a photo today and it made me cry. Someone…someone has my book between their hands. And they are not my momma and I am over the moon. Here is Mary (doesn’t she look amazing in rose?): 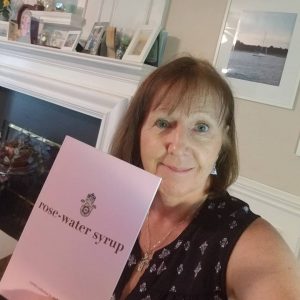 3. Tulips. They are all over The Cloud Cave and each one is bloomed the size of a newborn’s soft little head. They are gorgeous and have brought so much warmth to The Cloud Cave.