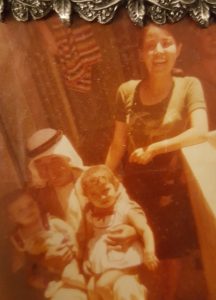 That’s momma. She is such a bright light, isn’t she? I mean. Look at that smile. Wow. [I am the little potato sat on the lower left-hand side on my (patrilineal) grandfather’s lap. May he be resting in peace.] The gentleness of our mothers is what I believe is our love-insulation in an often-times terrifying world filled with even more terrifying people.

Once upon a time, a man was cleaning his mother who was elderly and decrepit. He asked my Prophet (s.A.w.s.) if to do so was piety, and Muhammad (s.A.w.s.) replied No, that’s just recompense.

Islam directs us to the following, because it teaches us that the following are rights which our parents possess over us. We are to be merciful, humble, and kind toward them. We are to show them respect, take care of them, and obey them (as long as what they are asking of us is not contrary to the demands of Islam). As Shaykh Yahya Rhodus says, lower our wing of humility to them, out of mercy. To our parents (no matter their religion), but especially to our mothers.

According to one hadith, the Prophet (s.A.w.s.) taught that Paradise rests beneath the feet of mothers. This is to be understood in two ways – first, that it is by honouring our mothers that we might hope to enter Heaven; second, that it is by the strong influence and teaching of a mother, that her children may be guided to Paradise.

Finally, the main and most common names we use for Allah are Rahman and Rahim, the root of both is ‘rahm’, which means WOMB. I all-caps because I STAN SO HARD. Reflect on this point, more than any others above, because in it is much truth for our hearts.

I am sending love to all of the women who woke up this morning without mothers. To the women who had hoped to become mothers, but did not. To those who were mothers but are no longer. To the daughters among us whose mothers are still alive but absentee. To the mothers among us whose daughters are lost to them, while still alive. Your sisters have got you; always, we will have you.

To the mothers present; I don’t believe there is a greater jihad than raising children of character. You are – without doubt – extraordinary. Thank you for letting us siphon so much from you, both physically and emotionally.

Mother, mother, mother, and father. This is the order of importance of Islam. Thank you. (Please don’t #FATHERSMATTER me, ‘cus that ain’t what we’re sayin’. We’re simply sayin’ mommas matter more. Perhaps when you can grow an infant in your womb, and then shoot it out of your vagina like a bullet, you might bounce to second place. If you still aren’t on board, then take this one up with God.)

Today, I am grateful for:
1. My mother. I put her through hell and she never wavered, always and still demanding that I simply believer and behave better.
2. The womb. ALL OF IT AND WHAT IT DOES. I am still on my the body is WOW Google-frenzy.
3. Keanu Reeves. Listen, the closer we get to the release date of John Wick: I Love My Dog, v3, the more I will be referencing Keanu. A, you’re welcome; and B, he should be on everyone’s List Of Things For Which To Be Grateful.