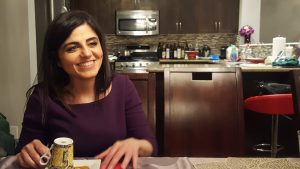 This is Rana, to whom I often refer as Ranoosh. She is a golden pepper, this little slice of family.

The world over, Muslim families donate food and drink (or money to this end) to feed those who choose to break fast in their local mosque(s). It is no doubt in Saudi Arabia felt most profoundly because of the sheer numbers involved; at Masjid Al-Haram – where the Kabaa is located – nightly, at least one million Muslims break fast and pray together.

This serves as only one example of the message of good unity in community repeated and so deeply rooted within the message of Islam. (‘Good’, because if you are hanging out ensemble to snort lines of cocaine, then ‘not good’ by Muslim standards. But you do you, Boo, because freedom of will.) For Muslims, this ‘unity’ is the reflection of Oneness of and in God Himself. From Him everything comes and to Him everything returns. I write this repeatedly, so this will not be a surprise to those of you who have read me for some time – within this concept of Oneness rests a deeper message of the Oneness of humankind. Because humans are asses, we don’t heed this deeper meaning, and among the Arabs of this Ummah, we have a racism problem (one of our many deficiencies).

During hajj, Malcolm X’s penetrating gaze saw and articulated it the best of Muslims: ”During the past eleven days here in the Muslim world, I have eaten from the same plate, drunk from the same glass and slept on the same rug — while praying to the same God — with fellow Muslims, whose eyes were the bluest of blue, whose hair was the blondest of blond, and whose skin was the whitest of white. And in the words and in the actions and in the deeds of the white Muslims, I felt the same sincerity that I felt among the black African Muslims of Nigeria, Sudan and Ghana.”

Now. Within the Qur’an rests the utter indivisibility between faith and good works. Further to this, and important to Muslims (of no consequence to those who are not) is that ”faith should inspire righteous deeds, which, in turn, should nurture a more profound experience of faith, which should incline one to greater acts of goodness, and so on, with each a function of the other, rising in a continuous increase.” (Even Angels Ask, Jeffrey Lang, 35-37.)

The one glaringly obvious link between all of them is that in order for us to commit them and grow in virtue, we must bind ourselves – via these acts – to others. Our own sense of self is directly linked to others.

To anyone reading, keep the above list with you – remind yourself to be patient and to make your heart bigger. Do it for yourself, and for your community; if you are a Believer, do it equally for your faith.

Community exists, and it is a reflection of you. Render it healthy and find relief within the spaces you’ve nurtured.

Today, I am grateful for:
1. Hospitals. I wish we didn’t need you, but thank you for being here.
2. Nurses. Samesies as above.
3. The lines on my hands. I don’t know what purpose you serve (NERDS, TELL ME!), but I appreciate that you give character to my skin, as I think it would be so weird to just have stumpy smooth plastic-y skin.