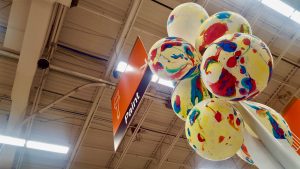 Again, no sleep last night and a back that feels each vertebrae closing in on the one beneath it. But, alhamduliLah, today there was a very small pinhole light which began to appear on this February Story’s (FS) horizon. InshAllah it will continue growing and by end of next week, a couple of the majour stressors associated with this matter will finally resolve.

One thing which this FS is challenging me to do is come face-to-face with what tawakul (تَوَكُّل‎) – trust / reliance in God – looks like in real time. There exists still a gap between my emotional (and for me, spiritual) ce, and my cognitive center (not simply the mind, but the heart too, since we know that the heart has neurons and there is ‘communication’ between it and the brain). Meaning, though my cognitive center is fully aware of and committed to this trust, my emotional one can still get messy and allow for things such as stress and anxiety to run me.

Again, I haven’t slept but for maybe an hour here and there these past days. I forgot to drink water yesterday. I am in a kind of tunnel-vision, wherein I am partially anxious about the future resolution of FS, and greatly stressed about all pieces of its puzzle. Were my emotional to align itself to my cognitive, then tawakul would remove both stress and anxiety. In their place would only be a necessary focus on all things that need to be completed, placed on a foundation of calm. Far more helpful, this. But.

But. it is a rare thing that the emotional aligns with the cognitive so easily. More often than not, in matters of all most things, I find that my emotional spirit takes more time to catch-up to the cognitive spirit.

Which is why, counter to ‘Western’ traditional thought, I believe that the cognitive is in fact far more likely rooted in our instinct rather than our brain. Or, to be more precise, it is that our mind is not in our brain, but rather in our instinct.

Today, I am grateful for:
1. Restaurants 4 Muslims During Ramadan (R4MDR, pronounced Reformador). I made that up, but it still holds. This evening, we had iftar at Pita Bell Kabab (1846 Carling Ave), a R4MDR; what that means is that unlike the other 11 months of the year, during this month, there will be a plate of dates at your table (which is how Muslims traditionally break their fast), a soup before your meal, and fruit or dessert after your meal, as well as coffee and tea.
2. The Home Depot. I can spend hours roaming inside of this place. Unexpected, yes? I love it there so much and feel a sense of empowerment and calm, though I know not a thing about drywall and cardboard other than you can poke a hole in them if you try hard enough.
3. Mariam. Full stop. Just and all Mariam.