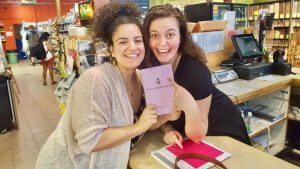 I love Ottawa’s summer vibrancy. Yesterday was our first actual hot day, carried into today and tomorrow. We are officially and fully in.

Ottawa is an interesting city. I am often surrounded by people who can’t wait to get out of Ottawa. Certainly it’s because they come from cities where their toilets are made of gold. Can you hear me rolling my eyes? I am doing it pretty loudly. (How about now?)

Right. Now that I’ve made clear how ridiculous I find this pretentiousness, let me tell you just how much I love Ottawa, especially in the summers. My only wish regarding Ottawa? That she weren’t landlocked. Otherwise, she is so vibrant and full of life, and walking up and down her streets today, I randomly ran into seven people I’ve not seen since before I left for my travels.

My morning was spent with momma at The New Art Festival (in Central Park, where I regularly picnic, read, and write). Momma had so much fun. A great deal of my joy was watching her enjoy herself as much as she did. Having her live with me has been great for so many reasons, not least of which is showing her what I love about my neighbourhood (and why I would be extremely hard-pressed to live elsewhere in this city). Every time I looked over to find her, she was several feet behind taking photos and admiring the gorgeous works of art. Do note that I could have easily spent $30,000 had I purchased the pieces which took my breath away. Make the time to pop in and enjoy all of the lush talent which my Ottawa has to share, friends. You will not be sorry.

From there, I met Tamara and Farah for coffee and catch-up so that they might pick up their own copies of rose-water syrup. So caught up in conversation over coffee that I forgot to take a photo then, so we harassed Farah after the fact. These women are so wonderful. I shy away from the Arab / Palestinian community at large, though I have individual friendships with those in it. After the divorce, my mother was treated as most divorced women are treated within the MENA community – abysmally. On top of which, because she was (and still is) so beautiful, women didn’t want her around their husbands (lest their loser husbands want a second wife AS IF MY MOTHER WANTS YOUR TRASH LOLS). The combination of envy and female-driven misogyny is an ugly thing. I watched what my momma lived, and lived through enough of that shit as a single woman with a mind and a voice unafraid, that I chose to, and will continue to distance myself always.

Give me an honest non-Arab Muslim over a Performative MENA Muslim anydayallday thank you, God.

Tamara and Farah are among the exceptions to the rule, and always have been. They are highly intelligent women, very sensitive to the ugliness of our community (as equally as to its beauty), and actively challenging and rewriting the narrative as they move forward in life. I am always excited to learn where they’re going next with their hearts. Right now, they’re heading for a couch to read rose-water syrup, and I am over the moon about it.

From them, I went on to drop off rose-water syrup at two of my local indi book shops. As soon as I have dropped copies off at another location, I promise to list them all in one post, to facilitate purchase for those of you in Ottawa.

Winding my way home, I stopped for coffee at my favourite joint, Café Morala. Best coffee and homemade bites in an Ottawa coffee shoppe, and the best people taking care of you. Today, it was Noel, with whom I was able to discuss a love of Dostoyevsky’s work (while noting he was a miserable man), and a loathing of Hemingway’s work and ‘manliness’. That’s the kind of intelligent conversation one can have at Morala.  Have you been? You should go. Tell Noel I sent you (though not in the next two weeks as he is off work).

My night-cap was actually the best ending to such a perfect day; I spent it with Martin watching John Wick, Chapter 3. FINALLY. Martin and I had a deal that we would see it together, and I would only see it after Ramadan. I was so committed to this that I turned down others and refused to even invite them to join him and me for this viewing. I don’t know what to tell you, friends. I didn’t think it was possible, but Chapter 3 is the best John Wick yet. And Keanu? He will be remembered for John Wick, not for Neo. Because Neo was wishy-washy, the greatest thing about him his love for Trinity. John Wick on the other hand is focused, committed, with both a purpose and principles.  And Keanu, with his full-bodied approach to acting, was tailor-made to play Wick. What a pleasure to watch.

Chapter 3 has officially replaced Chapter 1 as my self-care movie.

Today, I am grateful for:
1. Women who lift one another, and who remind one another that there is goodness and hope in abundance. Women who, when one of us says There might not be good men, the others start naming off all of the extraordinary men we know and love and see regularly.
2. Men such as Martin who serve as a reminder that there are some incredible men in this world. Trustworthy, kind, intelligent men who do not harm women.
3. The entire Art Department that worked on John Wick, Chapter 3. You are such talents.