The Lifeguard And My Broken Toe 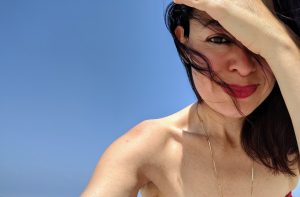 I’m happiest when there’s sand in my hair.

After having poke and finding fresh figs, I walked through this neighbourhood and was almost overcome with a sense of pure joy. Not completely there, but on the precipice of this feeling that I’ve not fully had since before May of 2018. This feeling is usually triggered by something very minor; last it happened was as I was riding a Ferris wheel in the dead of winter in London. I had to fight back tears because I was so overwhelmed by bliss. Today was the second time it happened this sabbatical, lasting a little longer than the first time, but not taking me the full course just yet. In time; I know that it will take me home in time. If you’ve not experienced it, this likely reads very odd. My wish for you (today) is to experience this at least once in your life, inshAllah.

Speaking of all things blissful, can we take a moment to be thankful for California Lifeguards? Apart from the fact that they save lives, it is not a stereotype that they’re hot. They’re legitimately insanely hot.

I sat next to the rainbow lifeguard tower, because it’s a rainbow, and at the top of my street, so an easy marker. You know what I discovered? Lifeguards don’t just pull your drowning ass from water; they also first aid your cuts, scrapes, burns and bruises. I watched My Lifeguard (officially) fix some kid’s something. So…guess whose “cutting” her leg tomorrow, friends?

Guess who maybe honestly broke her toe today, however? Leaving Oceanside, I was more discombobulated than usual, because of the following chain of events: I went to use a washroom, but when I opened the stall door, a man was standing inside doing Not Going To The Washroom (there are no typos in this sentence). Like some prick from The Blair Witch Project, he was standing facing the corner to the left of the door, so kind of facing anyone who opens it. I slammed the door immediately. As he left the stall, he walked past me and sneezed ON ME IN MY BATHING SUIT. I had his body fluids on my arm, and a woman who saw my reaction pulled out hand sanitizer and squeezed it all over me. No joke. I still want to vomit thinking about this. What happened in that moment is I jumped and spilled my iced coffee inside of my bag. Where my phone was resting, as was my Journal. My beach bag, which is some kind of aluminum insanity, didn’t drip, but rather created a nice Jacuzzi of iced coffee in which my phone and Journal lounged about. Only after about 15 minutes did I discover that everything in my bag, including my dress, had been soaked in iced coffee with cream. I used sand to dry as much as I could, in preparation for the walk home…in my coffee and cream dress.

Only by the Grace of God is my phone still alive.

As I was heading home in my milky sticky dress, I was – as mentioned above – confused. I’m sure I smelled of cream, coffee, hand sanitizer, and whatever sand smells like. Also, I smelled like drama and hatred.

Are you familiar with LA streets? These people have a lot of earthquakes, and so much of their sidewalks are literally upended. I was in flip flops. I don’t know if I smashed my toe on an upended piece of cement, a regular piece of cement, or a massive piece of protruding iron. All I know is that I fell into a Rasta, who was very kind and gracious and I’m sure curious why I smelled as I did. He smelled nice, in case you’re wondering.

My toe is swollen and stiff, but it’s not bruised. I iced it for around 20 minutes twice, and picked up some tape, and taped it to the toe next to it for my three hour walk. It’s better now than it was earlier today, though not back to normal. I brought heels with me, and they may just have to stay wrapped and tucked away this trip.

Keep my right toe in your prayers, please. I’ll see if My Lifeguard might help tomorrow…when I “stub” it on his tower.

Today, I am grateful for:
1. Wind chimes. They are in so many gardens across Venice, and they have a gentle way of pulling down my shoulders.
2. The sound of doves cooing. One thing people keep asking is whether the sabbatical has helped me identify where I might retire. Beyond a shadow of any doubt, it has to be somewhere I wake up to dove songs.
3. Imam Z@id Sh@kir. (I am obscuring his name because I don’t want people searching for him, finding me.) He is one of my very few living heroes; a mighty huge reality when many of our people continue to let us down if you just give them enough time. He’s also one of the first ten people to whom I sent a copy of rose-water syrup, and this morning, he sent Noreen a poem for me, which he wrote, inspired by my collection. I assumed his poem was about any multitude of things, until she shared it. It is a poem about me. About my life. I started crying when I read it. I really had no idea how much of my heart is in this collection. I had no idea someone such as him, so pure of spirit, might understand me as he did. What an honor and a blessing.