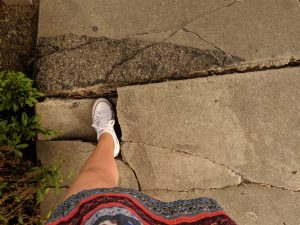 It’s not a broken toe. Most likely, it’s a Grade 1 MTP joint sprain. There’s no pain today, and the swelling has gone down; however, there is a small bruise right at the hinge, on the bottom of my foot. Range is still limited, but better than yesterday, and improving as the day goes on.

Mostly, I feel a bite either when I try to curl my toes forward, or when I am moving down in prayer to prostrate. Fingers crossed that tomorrow is better. No matter what, no heels in LA for this girl. To make certain you have a visual of LA streets, I took several photos for you – 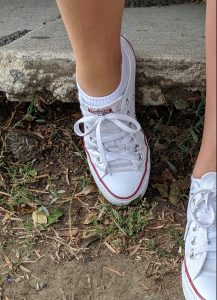 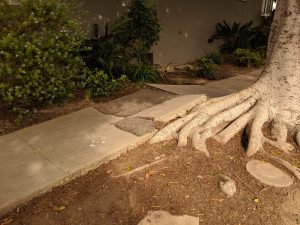 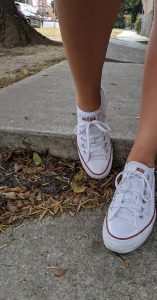 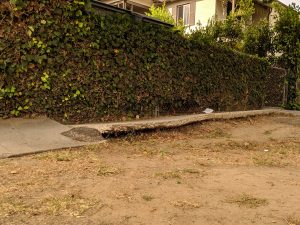 I mean. You don’t need to go to the hills to hike.

While next to My Lifeguard, I noticed people screaming in the water. When I looked, I saw several people hooting and hollering at a school of dolphins. I counted five, at least. Dolphins, not people. Dolphins, who are intelligent, unlike the people screaming at the top of their lungs to endear themselves to these beautiful creatures. Not a shabby start to my day.

On my way home for my afternoon, I picked four massive figs from a tree hung over its fence into the alleyway; each one was sweeter than the other. This is what I love about hot cities like Los Angeles – fresh food all over the place. Where such climates exist, I believe that all greenery planted by a local governing body must yield fruit or vegetables.

California, like far too much of the US, has a homelessness challenge that should not exist. Specifically, L.A. County’s homeless population is at 58,936, while the city’s at 36,300. (Source: California Today, June 5, 2019) The least that should be done is to ensure that wherever they turn, they have access to God-given fruit and vegetables. Instead, you must buy gross figs for $8 a teenie tiny plastic situation.

Capitalism and all its adherents are POS.

A small wrap-up note regarding yesterday: No, I will not be sharing Im@m Zaid Sh@kir’s poem. Thank you for your interest, however.

Today, I am grateful for:
1. The woman who gave a homeless man a few cigarettes. She was waiting for her boyfriend when the homeless man, watching her pull out a pack of cigarettes, asked her for one. Sitting inside of his tent, along the inner pathway at Venice, he had just been saying to another homeless man in his own tent, across the way “I’ll be getting food stamps soon. I’ll share them with you.” I know people who have several properties who don’t know how to share shit, and if I had cigarettes, I would have given him the pack. Whatever people need to make it through this life, man.
2. Enchiladas. We had dinner at a local favourite Mexican joint tonight (Paco’s at 4141 S. Centinela Ave); the wait staff was wonderful, and the decor of this place was wild – part nautical, part taxidermy, and part Medieval. One of the most famous scenes from Jerry McGuire was shot here, if you’re into this sort of thing.
3. Flora. I have been taking so many photos of beautiful flora all over the City. Because I am being extra cautious walking, my slowness has helped enrich what I am seeing.