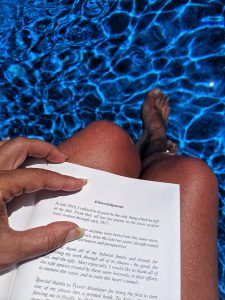 I spent the day by cool waters, shaded by trees full of birds. It’s a good jum3a.

A few friends have asked about the first part of rose-water syrup’s Acknowledgment page. Specifically, are all of the poems about the fella in 2016?

That situation was neither long enough nor rich enough to birth more than a few really awful pieces when I first began writing poetry. None of them are in this collection.

The 2016 situation was a catalyst for my writing in the form of poems. I needed to create something, and long-form wasn’t it.

All but two of the poems in the ‘lover’ section have each swum through several individuals through the years 2012 – 2017. There are only a couple at which I might point and say This one is more about so-and-so, but it also touches on this one and that one.

The men who would deserve a poem alone, are not men about whom I would ever write. Which is the conflict in your girl; I have never, nor will I ever write about the good ones, because my care for them is never-ending, and I afford their gentle hearts privacy. (Loosely translated, this means Don’t be an asshole, and you won’t be written up. Just like in grade school. It’s really that easy.)

There will, however, and no doubt one day be a man who changes this thing in me where I don’t write about the good. He’s coming. But without the creepiness of how I just made it sound.

Today, I am grateful for:
1. Salt-water pools.
2. E, for illustrating that good men are real, and viable, and anything but yesterday’s news.
3. Following through on my decision to limit my time on Twitter, and to receive my news through old-school means like papers and news websites. Believe it or not, this decision has done wonders for my sleep.