The Death On PCH Today 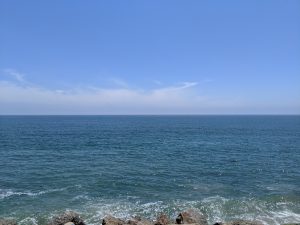 I’ve always read that blood is a lot darker than we think it to be, but it wasn’t what I noticed. It was brighter.

I rented a car for the rest of my trip to LA, and today after breakfast I decided to drive along the Pacific Coast Highway since I’d not done so in some years. Rounding a particular bend, I watched a small explosion. Black smoke that came out in one burst, and from it, a second large puff of more black smoke. Within less than a minute, I found the car and the motorcycle.

Gas was leaking from the SUV, the motorcycle was on fire, and in the lane of oncoming traffic, a body was on the ground.

I have had a migraine since.

The body, I couldn’t tell if it was laying on its stomach or its back. Angles. It was angled in all the wrong ways, at places where there are no joints. There were also body parts on the road. Bright. Bright red. I don’t know what they were, just that they were large pieces of human insides, I think. I don’t know how to get rid of this migraine.

A very young couple, or maybe they were brother and sister, were on the side. The girl was hyperventilating and she started to walk toward their car, the car which had collided with the motorcyclist, but I stopped her. I told her to take a deep breath, to stay away from their car. She listened.

I had pulled over, and emptied a small cloth sack inside the car. There was a man redirecting traffic, and I asked him how I could help. Did he need me to cover the deceased’s face, for privacy? He said the motorcyclist was still wearing his helmet. I didn’t know if this was a yes or no answer to my question so I stood and waited.

He told me he couldn’t reach 9-1-1. For whatever reason, and though my phone’s data wasn’t receiving or sending for some time, I had phone service. I called 9-1-1 and handed him the phone because I didn’t know how to give directions to where we were located. He was able to give dispatch our coordinates, but I don’t remember them. I do remember the exact bend of highway, however.

I’ve never seen death so clearly. I’ve never seen a body covered in a tarp, which is what the police did when they arrived. His leg remained uncovered. It was not angled right.

The motorcyclist would have just passed me a few moments earlier.

I stayed until the firefighters came, and watched them begin clean-up of the road. They have a special broom. This is when I turned around and left.

I had to pull over a few times because I think I was having panic attacks. Every motorcycle that passed me, they pass in the middle of the lanes. I didn’t know how to hold onto the steering wheel with any less force. Three vehicles with sirens passed me during my one-hour drive back, but I don’t remember what they were. Cops? Ambulance? Fire? Only that each time one did, I started crying and had to pull over. After the third car, I turned off the car and hiked down to the water, where I sank into the ocean. I didn’t have a bathing suit because I had come from breakfast. I didn’t know what else to do; my mind remains jumbled.

I will go back tomorrow and place a flower at this bend. I think.

Today, I am grateful for:
1. Being alive.
2. Being safe.
3. Having another day to tell people I love them, and to do right by them.