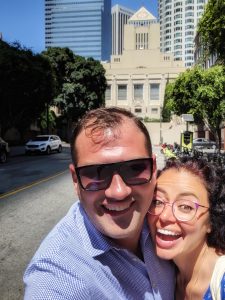 Gavin. One of the few people from work I’m interested in seeing while on The Sabbatical. I would have taken a photo of him purchasing rose-water syrup, but I forgot to pull out my phone. Next he’s on here, I’ll make certain it’s a photo of him with my book in hand, InshAllah.

He convinced me to go to DTLA, so I did. And spent the better part of my late morning inside of the Central Library, from shelf to shelf, because this is my preferred location in downtown Los Angeles.

I hate US downtown cores, but for parts of NYC, and Chicago. America is, for all intents and purposes, the biggest racket around. Next to people sleeping homeless in the streets are people in Ferraris and Lamborghinis. Ugly people, because you can’t possess this kind of wealth without some kind of blood on your hands. It’s simply not possible. The more I see, the more I become convinced that God gives money to those in which there is no redemption, and takes it from those in whom there is.

Don’t get on my case and tell me He loves everyone equally. Because no. He sees into hearts, and that is the only place we find truth.

As I was walking, I had to step past a man laying on the street convulsing, drug-related. I stood stunned and reached for my phone when I made eye contact with the man in the car right alongside him. He was already on the telephone, and signaled that he had it under control.

Good, because I didn’t know whotf to call. Not cops because he was a man of colour, and we know what happens to wo/men of colour when they face American cops. Not an ambulance because what would happen if he didn’t have insurance? Would I cause him financial distress, from which he didn’t want to / wouldn’t be able to recover?

I wish I could tell both you and myself that I had the strength and the courage to wait until I knew he had received help, but after Sunday, I don’t have any reserve left in me to stand by another dead body. I had to leave while I knew that he was still alive, which meant that I walked away from him as soon as the convulsions weakened and his breathing seemed a little less strained. I saw a security guard a little ways down so I walked and stood with him instead.

Does LA have a non-cop related telephone number to help people in drug related distress?

He looked at me like I was crazy. Said he didn’t know.

The cops come by here every few minutes so they’ll find him.

I don’t want him to be found by any cops. He is a man of colour. He is elderly. This is drug related. That man in the car called someone. I don’t know who, though. Why isn’t there a safe phone number I can call?

I used to love this city but this trip is seeing me struggle. I used to love America, but I am terrified of their White Supremacy. I am terrified of their cops and their ICE agents, though California is a place of legal sanctuary. I didn’t have my passport on me. I had no identification to prove who I am because everything is safely locked at home. I won’t do that again in this country, because it left me feeling powerless today, which is bullshit because of my line of work and my own personal connections.

I understand this may feel jumbled to you; I am writing about drugs, poverty, sanctuary, deportation, and my own safety. Again, cognitively, it makes no sense. Emotionally, however, it is a different reality.

All I could think was Get to Gavin safely because he can prove who and what you are if you need him to. Completely and totally unhinged and without reason. Maybe I need to get off the hellscape that is Twitter?

Lunch with him allowed me to numb myself for a part, allowing me to ignore everything for some hours.

Thank you Gavin; more than you might possibly understand, lunch was exactly what this heart needed.