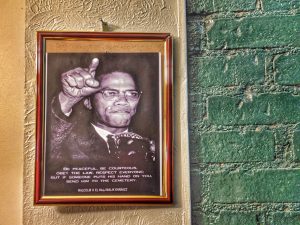 I spent the better part of my day in Harlem, following the spirit of El-Hajj Malik el-Shabazz, better known still as Malcolm X. 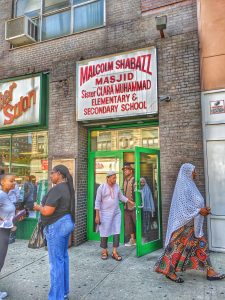 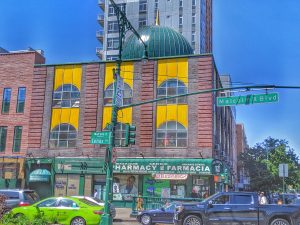 I decided to complete my duhur prayer, and listen to the khutba (sermon) at Masjid Malcolm Shabazz (102 W 116th St), once known at Temple no. 7 under the Nation of Islam.

This is where he, resting in Light, presided as Minister while with the Nation. In 1965, the Temple was burned down to the ground after he was assassinated in the same year. It was later rebuilt in this new location, and renamed, when the Nation began to slowly turn to Islam. It now identifies as a Sunni mosque. 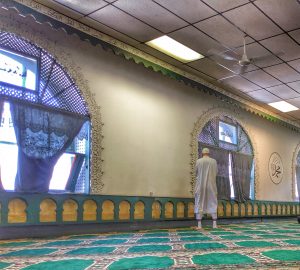 The khutba was rudimentary in the knowledge which it presented. I am thankful for the reminders. It is clear that they are still imparting new and very young knowledge to their attendees, and there remains a heavy NOI influence throughout – from the militancy of the men telling people where to sit, to the high praises which the khutba gave Elijah Muhammad, the man who ordered (along with the facilitation by, and support of the State) the assassination of the man I hold so dear. I was, at different times, uncomfortable to say the least.

That aside I am happy I attended, so that I might understand this experience. I hope they continue to grow and lean into the Islam for which their namesake was murdered. Not surprisingly, and while there was a photo of Elijah and his wife, there were none of Malcolm.

From here, I made my way to 28th Precinct, where Malcolm got onto the radar of the State; it’s here that his exercise of power and leadership was noticed, rendering him an enemy. On April 26, 1957, and as dramatised by Spike Lee, Malcolm led thousands of NOI followers, both male and female to the station because fellow NOI follower -Johnson Hinton – had sustained injuries at the hands of police and was not being tended to as needed; only due to Malcolm’s intervention did the police take Hinto to the hospital, and only then, again under his leadership, did the thousands of NOI protestors disperse. One of the most famous quotes about Malcolm came from this incident, uttered by a cop witness to the above This is too much power for one (Black) man to have. 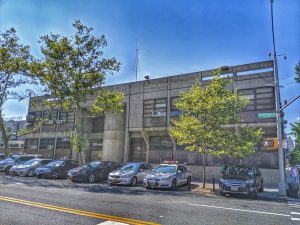 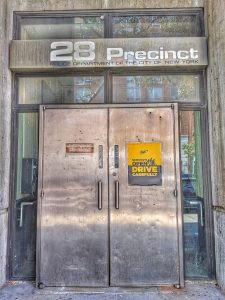 I figured it was enough that the cops had video of me taking photos, so I left as quickly as I came and made my way down to my last chosen stop – the mosque which Malcolm established post split from the NOI, and return from hajj, the Mosque of Islamic Brotherhood Inc. (113th Street and St. Nicholas Ave).

Though I missed their juma prayer, and there was only one other woman inside praying with me, those outside welcomed me with open arms. I was too shy to stop and ask anyone questions, and wasn’t sure I might ask anything without falling to some kind of pieces.

As soon as I walked in, I was greeted by El-Hajj, which is the photo at the very top of this piece. Whenever my next Friday will be spent in NY, it is here that I will come to pray, inshAllah. 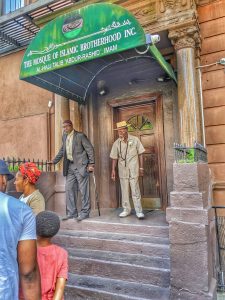 It’s difficult to describe how important this day is for me, or how much pain it brought. I still react very strongly when I think about his assassination. I am still overwhelmed when I consider how he revived this deen, and how many he continues to lift. So much, that I couldn’t bring myself to visit the Audubon Ballroom; it’s memory is not one I wish to visit.

Muslims believe that our death is fixed along with our birth, and so Malcolm’s journey was always intended for only such a short period of time. I can’t be mad, but I will always remain heartbroken. 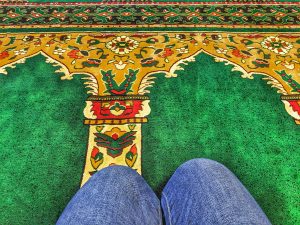 Today, I am grateful for:
1. Having the opportunity to pray in these two mosques. No man like El-Hajj has come since he left us.
2. Him.
3. Meeting old friends. After Harlem, I met up with Beatrice, my old boss, now presently at the UN. I love catch-ups, but especially knowing that I will have these catch-ups all over the world because of work. It does make for interesting conversations, always.