The Pedestrian Review Of Sea Wall / A Life 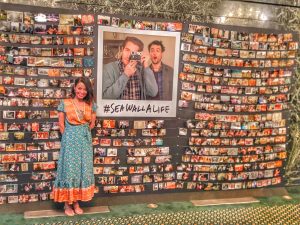 Funny thing about this photo, which began before I arrived at the Wall. See wall? It’s full of life. Clever, innit?

When I arrived at the theater, the lovely Natalia asked if I was alone. To drive home the point of my singleness not all.  Later, when I made my way up to The Ambassador’s Lounge, Veronica confirmed my oneness. Without intention, it did make me smile. Finally, while trying to take a sad selfie, it was of course impossible to get the entirety of the wall, and so after a few lame tries, one of the lovely doormen came over and took my phone from me to snap this. He outright said that he never did so but felt sad for me. Yay!

Also, a particular shout-out to Mark in The Ambo’s Lounge. Thank you for keeping me company. And to Suzanne from NY, Stephanie from LA, and Sonia from Romania; each were seated alone and so I invited them to join me. Why should they sit alone while I was also solitary? Thank you for your company.

One thing of particular note is that every single one of the staff at Hudson Theater is exceptional. They are so kind and generous to everyone with whom they connect, and so a primary and very huge shout out to their human resources department for hiring such an excellent team.

Now. As to the play itself.

I am an only child who is freakishly close to her parents. Further, I don’t have children though had always hoped to be a momma. Finally, I also don’t have one particular man to adore fully just yet. So this play, whose primary themes are familial love and loss, and romantic love, was heart-rending. I don’t know how these two men walk away from each performance if not a little devastated.

Tom’s the first act, who simply ambles onto stage unannounced and it begins. Jake, too, as signal of the second act. Each is a monologue, and I found myself wanting to yell out my own personal answers throughout. Their performances are so real, that you wonder how we have not seen the wedding photos of Gyllenhaal across our screens as lead-up.

I knew nothing of Tom going in, but let me tell you – he is both extraordinary and stunning. Like, proper beautiful to watch, with the perfect mouth. At different times, I found myself wanting to whisper “hi. I love you. Fancy a coffee to discuss the concept of God?”

His performance had more linear parts to the storytelling, and from the moment he began speaking about a particular character, you instinctively understand that this character will, at some point during his telling, pass from the story. When they do, and though it is not unexpected, it remains devastating. He is an absolutely supreme performer.

Gyllenhaal. His eyes are more blue than you might imagine, but he is not as beautiful in person as I had estimated. What is stunning about him is his presence. To say that he commands a room is an understatement, and though I have always believed that he is one of the greatest actors of my generation, I now hold to this more than ever. His monologue also contains two stories woven into its fabric, and the way that they are interwoven is far more seamless than Tom’s. Almost as though the writer picked up steam as he wrote.

No matter. They are both exquisite.

Two further and interesting notes at today’s 2pm performance – at one point during Tom’s act, a cellular phone went off. He wasn’t thrown, but rather waited gently until things returned to center; this, a sign of an excellent performer. (Later, during the question period, someone called it ‘disrespectful’. Frankly, it was not. It was simply an oversight, an error in judgement by a slightly older woman who had forgotten to turn off her phone. Who is so perfect that they don’t make the occasional error?) During Gyllenhaal’s piece, one woman began to sob hysterically at the mention of his character’s loss. Enough that he went to the back and brought out a box of tissue, and became genuinely concerned; enough that I asked if anyone would just give her a hug and make certain she was okay. (The same person who would later label the phone ringing ‘disrespectful’ told me to shush.

I was ready for a throw-down, so turned to look at them very confused and asked if they were okay. They ignored me. I still find their reaction so odd – a woman was sobbing, ffs! If you can’t handle human behaviour without becoming agitated, if you can’t approach everyone from a place of love, then you’ve learned nothing from the performance and you are best to stay home alone and avoid human contact.

Since, as we know – alone is nothing but an invitation for strangers to show their kindness. As my experience proved today.

Take tissue should you attend. If you are not moved, you might be a terrorist.

Today, I am grateful for:
1. Not getting shot by the police officer in front of Trum¶ Tower. Puttering along, I hadn’t realized where I was, but made curious by the insane security outside of the building, I looked up to discover it was what it was and both made a face and convulsed at the same time. Like I was a modern dancer. As soon as I looked back down to street level, I made eye contact with one of the officers who didn’t look amused. Thanks for not shooting me, friend.
2. Travels with Poppy. We tasted Shake Shack for the first time today and I get it. In all of its fast food unhealthy glory, I get it.
3. The NY subway system. You are my favourite.