The Sexless In The City 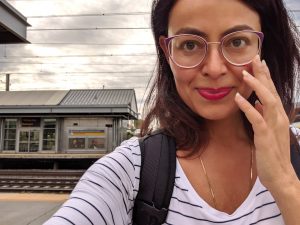 I bet I got randomly selected!
You did! How did you know?
Because I’m Muslim!

The Immigration officer was not as amused as I was. And this is how my day started in NY, right after which I took this selfie.

Sade was playing in Penn Station, so she turned it all around.

I spent four hours walking and eating street food. No place in the world compares in street food, and in NY, it’s almost all halal but for the piglet pieces. I went looking for Hudson Theater, which is where I will be seeing Sea Wall / A Life tomorrow, inshAllah. There was a massive lineup, and so to see the inside of this place, it’s best for anyone going to in fact get there quite a bit earlier than stipulated curtain time.

I found the mural which continues to show up on Sea Wall / A Life’s feed, and loved it so much, that I took a photo next to my personal favourite person on the wall. Officially, neither Jake nor Tom, but rather the play’s Director, Carrie Cracknell.

Here are both this photo, chosen after at least 30 awful ones due to humidity and terrible lighting, and also a photo of the entire mural – 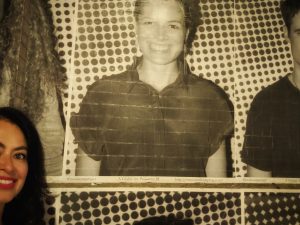 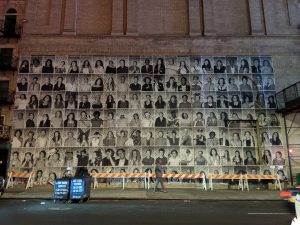 Can you find Tom and Jake?

You will receive all impressions tomorrow.

Now. While in California, I had promised to get back to you about American men. They are quite particular, and what different creatures they are from most of the rest.

They are blunt and unabashed in their pursuit of a woman. This was the case in California, and again here in NY. Only here since 2pm, two men have asked me out, and one asked for a hug. (More on the latter below.)

Today, I am grateful for:
1. The French infant screaming MAMAAAAAN at the top of their lungs while their maman was pushing their stroller. When she stopped to ask What?, the child just smiled and waved. This little human made me warm and fuzzy for at least two blocks.
2. The rap artist who asked me for a hug when I didn’t take his cd, and circled back about 20 minutes later to tell him that the only reason I didn’t was because I don’t have cash, not because I didn’t think he was talented, which he very much is. In case you are wondering, it was a very sweet and gentle hug, and as halal as a hug might get.
3. The new couple next to me at the restaurant making out. People found you annoying. SO DID I. But I really enjoyed eavesdropping on your conversation (especially the You’re veiny! comment which was met by Do you want to see my vein? followed by a lot of laughter). Thanks for the laughs. Hetero men might just be the literal worst.