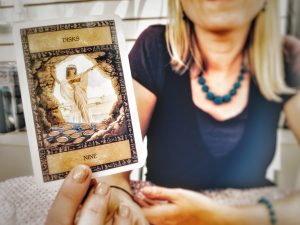 I don’t believe in it, but I enjoy it when it presents, which it did tonight. I believe that the same energy courses through everything, and so there are answers and signs everywhere. I also believe that God speaks to us through a variety of different means, such as dreams and gut feelings. If you would like to believe that on the odd day, Tarot is a voice He chooses, as a means to guide you, that is yours to believe.

Her name is Dorata, and as soon as I sat down, she informed me that she “was not psychic”. Clearly, people take her literally and very seriously because there was a nervous energy about this caveat. I liked her immediately.

I didn’t ask a question, because I hadn’t prepared a question. Instead, I simply sat down and shuffled the cards; what has been weighing on my mind will shuffle itself in naturally, I thought. I was the first to sit at Dorata’s table, and appreciated that she was wearing a hat. It made me think that she had spent her entire day outside, enjoying our gorgeous heat.

I barely spoke two words to Dorata beyond a hello when I sat, and for the duration of the reading. Only after did we discuss how what the cards saw fit into what has, and is happening in my llife.

The first card represented the subject-energy of the past which brought me to present day concerns. I received the Three of Pentacles, meaning: Disharmony, misalignment, working alone. Dorata interpreted it simply, as ‘loss’. Because she is James Bond, she waited a beat, and then clarified ‘loss. Financial loss’.

The second card is what led to the subject-energy, which showed itself as Death, meaning: Endings, change, transformation, transition. To Dorata, it was ‘one time financial loss that will not be repeated’.

The third, what I must do in the present, was the Swords King, which demands mental clarity, intellectual power, authority, truth. Dorata instructed that I ‘let go and trust the universe. It’s coming’.

Finally, the fourth card is that which Dorata is holding in the photo. It is the final future result, which she described as a card of ‘plenty’. Minor Arcana, the showing of Nine of Pentacles should generally be viewed as “…a great omen to get as it represents success, independence, confidence, freedom, security and stability. It is a Minor Arcana card of abundance, prosperity and wealth gained through hard work, self-discipline and control and self-reliance. It signifies that you have worked very hard to create the success and status you are experiencing and now is the time to enjoy it. So indulge yourself, pamper yourself and enjoy the luxury and contentment your accomplishments bring you. The Nine of Pentacles also signifies beauty, grace, elegance and sophistication so you may find yourself enjoying the finer things in life when it appears. This card also tells you that you have gained maturity and wisdom through your perseverance.  If representing a person, it usually represents a strong, confident, independent woman who is beautiful and sophisticated and has worked hard to get where she is.” (Source: TheTarotGuide.com)

Dorata sat back surprised. She said it’s one of the best spreads one could hope for, as it comes full circle in the sense that the thing I lost would come to me in another form. And better.

Today, I am grateful for:
1. The woman who walked past me carrying two bright yellow tubers, one in each hand, very nonchalantly. At first glance, I thought they were water bottles, then realized they were some form of a yam? Maybe an oddly long sweet potato? Definitely tubers. Your confidence and grace were something to behold.
2. Vivid dreams. I have needed a very specific thing lately. Tonight, I dreamt of it (which has happened before) and my dream was so real and so vivid and full of all of the things that it satiated for a time this thing which I have been missing for a little. Like I have always written, God works in beautiful and mysterious ways.
3. Doing laundry. Because it means that I have clothes to wash, and eventually clean ones to wear.