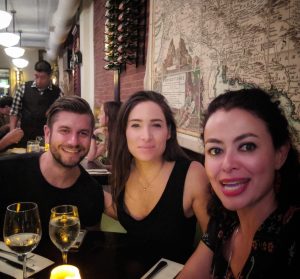 Still talking, and still confused by the camera.

When in New York, make certain to visit the Tenement Museum for their Under One Roof tour, a beautiful homage to the immigrants on whose backs this country was built.

We did two tours, and at the end of Under One Roof, we were told the story of Mrs. Wong, still alive today. Having immigrated from China, she raised three children on her own while working in a garment factory, and put all three of them through university.

Wong, when she applied to sponsor her brother to come to America, had to be fingerprinted. It was then that they discovered that her fingerprints no longer existed; they had been worn off after a lifetime of running cloth beneath them.

I considered that this might be a metaphor for the immigrant experience – erasure of unique identity – but that would be a disservice, diminishing the infinite experiences of immigrants. Instead, I think that while it might touch on that, a more pressing issue is Why the fuck are we working anyone so hard that we literally take of them parts of their bodies?

The tours leave you with much food for thought, and this is most definitely a wilful intention.

The guides are excellent, and extremely well versed in the racist history of immigration policy. They speak to these matters readily and very openly, while the tours are shaped to allow for, and encourage dialogue between the participants. I highly recommend that you make the time to visit this place and support their work.

Of most interesting note – they purchased the tenaments before the neighbourhood itself became the next best thing and all property began selling for millions. Some of the buildings had tenants in them, whom the museum moved and whose new rents they continue to subsidize so that they pay exactly what they were paying in the buildings acquired by the Tenement Museum. It is clear that the Museum itself has built intimate relationships with the people whose stories they share as a means to educate; this, I believe, speaks to the character and integrity of those who established this beautifully educative experience. 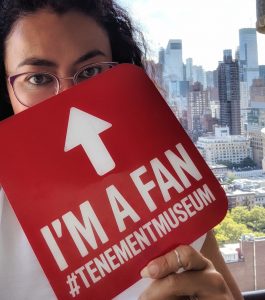 A minor detail, but one which made the tour even more fun for me personally – I was definitely crushing on our second guide, Jakub. I wanted to invite him out for coffee to just talk. For hours about all of the things and any of the things. He reminded me so much of my Scott, my first ever real love, that I wanted to hug him after we said goodbye. (I did not. I neither hugged nor invited him out for coffee, because I really was a little shy to do so. But, there are people we meet and think I could love you, and that’s what Jakub is. He is one of these men now forever.)

Today, I am grateful for:
1. Immigrants. ‘We get the job done’.
2. Single mothers. We see your struggle and we will always be at your feet.
3. Poppy’s recommendation that we go to the Tenement Museum.