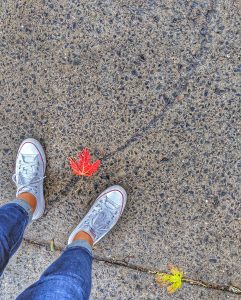 These dead leaves are one of my favourite things about the Fall. They line the streets with gold and scarlet; what’s not to love?

Staring out at them, I spotted a hornet on the window. I am sat inside of a sort of cubby square, the size of two humans; two sides of it are windows – ahead of me, and to my left, while to my right is a wall, and behind me everyone whom I am ignoring.

I am terrified of bees and hornets and anything that flies which is neither object (but for weapons of mass destruction), nor bird. Meaning, I couldn’t let it be. Further meaning that I struggled to open the window so that it might fly out to meet its friends.

It was not pretty. My hair certainly frizzed during this struggle, and my glasses fogged up.

Very quietly, a man approached with disposable cup and a piece of paper. Without being asked to, I moved out of the way as he placed the cup over the hornet, slid the paper between the cup and the hornet and took it outside to FREEDOM!

I stared at him, saucer-eyed and stunned. What he was doing hadn’t even crossed my mind. I mean, just last weekend I killed two hornets at Laurence’s. These things FLY, so while I might do this to a spider, I wouldn’t risk a hornet zipping at me super fast to sting me. (Do hornets sting? Do they zip?)

Honestly, I was super grateful for two reasons. First, the hornet was gone. Second, with foggy glasses and frizzed hair, I was about to go Full-Arab, moments away from removing my shoe and launching it at the hornet with the intention to kill.

Why? Because I had considered stomping the hornet dead, but ultimately concluded that this was impossible because I couldn’t reach the window with my foot still in my shoe, unless I stood either on the chair or the table. The window is high; that I even considered karate chopping a public window that wasn’t at ankle level should tell you my state of panic.

I mean. I could have tried, but that would have either landed me in the hospital, or on a date.

Today, I am grateful for:
1. The song “Dust In The Wind”. This is one of the songs that I can play on repeat and my ears will never bleed. My God, how I love you Kansas ❤️
2. Men who smile first. This is, oddly, a rare occurrence. Usually I have to smile first before they reciprocate, and then run into a bush. The Frenchiards (which is what we should be calling them, frankly) smile first and it’s welcome.
3. My girlfriends making allowances for my completely unusual schedule.