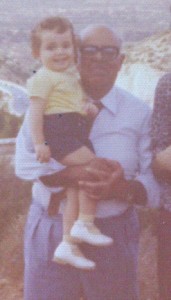 I am the small potatoe held by my matrilineal grandfather, this photo of us in Occupied Gaza. Please notice how my yellow socks match my yellow top, and how happy I am. Also, how proud he is of me, his first little potatoe.

“YA ALLAH! Fiiiiive? Noooo laaa’!”
“Around then. We have to come down here after salaat el-fajir and pick the figs that are ready or else the birds will have them for breakfast and you’ll have to wait until the next day.”

And so it was in this way – seduced by fresh swollen figs, their hearts coloured and tasting of burnt sugar – that seedo convinced me to plop out of bed at the age of four, the year that the tradition was born and which  would remain for my summers in Gaza.

In my ruffled pink and yellow nightgown, he would carry me out of bed and sit me next to him on the green sofa in the living room while drinking his coffee. Leaning on him, I would slip my feet into my babooj and wait quietly while the aroma of his ahwa filled my head and we listened to the whisper of Qur’an playing gently in the background. We never spoke during this time, my grandfather leaving me to waking and I to his coffee and Allah.

The coffee he sipped from a treasured cup because it was the perfect size for my little hands. Daily, he handed it to me so that I would have the last sip; the sweetest and the thickest part of the potion were mine, a secret we never let outside of our early mornings.

I would clutch the cup in both hands while he placed his hand either on top of my head or on my shoulder to gently lead me down into the garden and out to the fig tree. I was so worried I would drop and break the cup that if it were a person, surely I would have suffocated it with my protective grip. In his other hand, he always carried the same ornate bowl.

At the tree, he took the coffee cup I so carefully handed over and placed it on the window sill. I never saw him bring the cup inside and so believed it to be made of majic just for him. Unlike the other cups, this one sat alone, not a part of a set I could ever find no matter where I searched in the house.

Lifting me carefully to where the ready figs hid, seedo would always wait patiently as my small hands struggled to grasp and pull free each one before gently placing them in the bowl.

We ate the figs while seated on the front steps of the house, never sharing them with anyone. Every morning that summer, he would take me back to bed and tuck me in, kissing my forehead and letting me sleep until the house’s natural order woke me. He never left me awake, instead sitting on the bed next to me while I held one of his hands in mine, hands that remain the softest I have ever touched; little cushions brought together for comfort and safety, kindness and protection, I would keep pressing on the insides of his hands until I fell asleep behind my own back.

When I broke the seal and went to Gaza for the first time after he was done with this world, I said hello to everyone and then immediately went to his room. I turned on his short-wave radio, tucked myself into his bed and cried myself to sleep.

When I woke up, I went looking for the coffee cup and the ornate bowl, found in a box inside of which he kept only a very small number of his most important possessions. Among them, all of the letters my mother wrote telling him about me as a baby, his eldest an eternity away with a new child of her own.

These letters I stole without the knowledge of anyone, letters it takes me hours to read because my Arabic simply isn’t good enough. But I have them in my drawer, written on soft paper made softer with the humidity of besieged Gaza and time, serving as gentle reminders of seedo‘s hands.

Today, I am grateful for:
1. The dream I long ago had about my seedo, shortly after he left dunya. He was young, and so full of life, in a beautifully tailored green suit, come to warn me from a particular man who had presented himself for marriage. I followed his advice, against the wishes of my family. We later discovered this particular suitor beat his ex-wife right into the hospital.
2. The memories I have of my grandparents, but especially my grandfather who was my father-figure when Baba was not.
3. That rose-water syrup has made her way to the university students in Gaza and will be featured at a poetry symposium in a couple of months. This is the most incredible thing in the world right now. Home. rose-water is really home.

26 thoughts on “The Gazawi Figs”