The Magic of The City 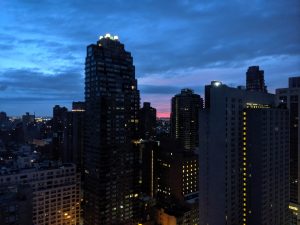 This image is unfiltered, and it is the view from my bed, which I can only describe by referencing an Arabic saying – it opens your nafs, with ‘nafs’ meaning your self / heart. I prayed fajr, and then watched the sky as our little world turned itself to greet the sun. What a beauty this experience always is.

There is so much to do there, and I was usually completely wrecked by the time I sat to write these pieces, that they ended up being more descriptive than reflective; now that I have a moment, I do wish to touch on a few minor details.

First, like Egypt, I got called Shug and Baby by everyone. I LOVE THIS SO MUCH AND WISH EVERYONE IN THE WORLD DID IT. It just feels like home in so many ways.

Second, tourists on the Brooklyn Bridge are, for the most part, complete assholes. Not to other people, but rather to themselves. So many of them were flopping around atop the railing of the bridge for the perfect selfie that I found myself madly Googling How many people fall off the Brooklyn Bridge annually and are they all tourists? (Also, I am wickedly afraid of heights.)

Third, locals on the Brooklyn Bridge absolutely hate every asshole on that bridge. They are hard cycling along and literally screaming at everyone to move out of their way. One man was screeching BEEP BEEP BEEP BEEEEEP BEEP BEEP. Hands down, he was my personal favourite.

Fourth, Harlem’s men are far more attractive than Manhattan’s. They are gorgeous, in fact. And they have the absolute most beautiful smiles lighting up their Harlem streets. I would be hard-pressed to live in any neighbourhood but Harlem.

Fifth, did you know that Dumbo, Brooklyn is in Manhattan? If you didn’t know this it’s because you’re way smarter than I am. I asked Google to take me to Brooklyn Bridge and so I assumed it would take me to…to the Manhattan side of Brooklyn Bridge. Why? I DON’T KNOW; WHO KNOWS HOW MY BRAIN WORKS? Anyway. Here’s the best part – I was genuinely confused when I walked out of the metro station to see all of the ‘Brooklyn downtown’ signs, because I still thought I was in Manhattan, and the Brooklyn downtown signs were not a dead giveaway that I was not. I distinctly thought: How nice of Manhattan to point me (so early on) in the direction of Brooklyn downtown all the way from across the water. I am really this dumb.

I believed I was in Manhattan for at least one hour, during which time I took at least 50 photos, stared at the Manhattan skyline across the bridge, and ate half of my mango. Remember I told you to eat these mangoes while stationary? It was only then that I, staring downwards at Dumbo, Brooklyn, from whence I had just come, that I realized I was on the Brooklyn side. That I had completely missed Dumbo. That I walked right through ‘Brooklyn downtown’ and ignored it. My immediate thought after I realized where I was, what had just happened, and while still eating my mango on a stick? I would really suck at The Amazing Race.

Which begs the tangential question Does Maha watch The Amazing Race?
No. No I don’t. But this thought is a perfect expression of the nonsensical inner workings of my brain, dear friends.

I have written this before, but honestly – how am I still alive, when left to my own devices I would fall into a puddle and drown?

Finally, this is the only city which I was actually sad to leave, not least of why was because of this view. As real as the rats and the cockroaches of New York, so is its magic – you really do believe that at any moment, and at the turn of any corner, anything might happen, and everything is possible.

The City of Dreams, indeed.

(There will be a piece about the underbelly of New York as nightmare soon enough. Hi! Welcome to the Libra Maha, balancing shit out 100%.)

Today, I am grateful for:
1. The entire Starbucks crew right outside of Gates B51 to B57 at Newark. You were so bright and chipper far too early in the morning, which definitely placed the rest of my day on the right footing.
2. That I did not break my ring finger this evening when I closed my ladder’s hinge on it.
3. Having soap, and detergent.