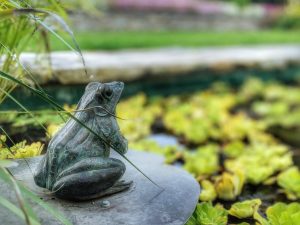 This is a frog. I like it because it’s not real. Once, in university, a friend’s boyfriend went out to grab our dinner, and returned with two paper bags. Standing at least 15 feet away from us, he enthusiastically declared I’ve got a live frog in here! In response, both his girlfriend and me made enough noise that the frog got scared and peed itself inside the paper bag. The pee leaked all over this person’s hand. Which is the best part of the story because wtf was he thinking bringing home a live frog in a paper bag? We don’t live in the country, you asshole.

My mind is firing in a million different directions because I am presently on a psychoactive drug.

Most of you know that I gave up caffeine about three years ago. I made this decision because caffeine does a number on me; I am an already super hyper woman who naturally vibrates on a frequency higher than most. Caffeine would hit my nervous system like a truck, because I drank so much of it.

This morning, I woke up and decided that since I am on a tight and insane study schedule, I would have a regular coffee. Because I apparently can’t even do this without smashing into an extreme, I, at 9am, ordered a 20 ounce venti.

Y’all. I am still buzzing. My brain is looking at everything and classifying it. My tasks are being organized in my head at the highest frequency possible. I am not simply multi-tasking, but rather infini-tasking. My brain won’t stop, and neither will my mouth. Also, I am laughing A LOT.

I think I will keep drinking one venti a day at 9am. Because this is good. It’s so good.

Thank God drugs are haraam; I would be injecting cocaine directly into my veins otherwise.

Today, I am grateful for:
1. My very own, and human Shazam. I just have to hum a tune, and she can name it, like some proper and demented DJ. I love Tasha so much for this, and so many other things.
2. Roasted pumpkin seeds. They are my afternoon study snack which I can only find at Middle Eastern grocers. Why is this?; doesn’t the rest of the world know of this magic little seed?
3. Having woken myself up in the middle of the night because I was laughing so hard. I couldn’t tell you about what I was laughing, only that it was super hilarious. Probably, I was laughing at myself.