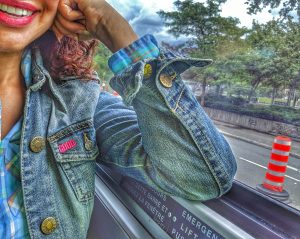 They are a married couple named Mary and Joseph, both in either their late 60s or early 70s. When I met them, Joseph was bleeding from a cut on his head, and being instructed by Riva to lay down, and prop his head in her lap, elevated.

Mary was slightly discombobulated, just wanting to go home, while Lisa was about to call 911.

At the Vendome station in Montreal, at the bottom of the steps is where I found them.

I had just arrived, and was about to head over to Laurence’s when, as I walked up the steps to exit, I noticed a commotion to my left as people were descending. When I could finally look through the dozens of people, I saw what was clearly fresh blood on the ground so immediately made my way up and back down the steps because railings didn’t permit that I cut through. Mind, even if there weren’t railings, the crowd was moving along too fast for me to change direction.

Earlier today, and though they usually take taxis to commute, Joseph had wanted to take the Metro. Against Mary’s gut instinct, she went along with his plan.

For those of you unaware, and though the Montreal Metro is very easy to navigate, far too many of the stations are not for anyone with any kind of disability. Mary has a rolling walker and was forced to use the stairs because there is neither elevator nor escalator.

Joseph had tripped in the crowd and couldn’t regain his footing or find anything to grab a hold of. He fell forward, pushing Mary down the stairs and falling after her. From a cursory glance, he received the biggest trauma – a cut to his head, along with a very large bump and immediate bruise.

Riva is a registered nurse and was a God-send. Lisa was a passerby who immediately got on the phone to 911. A young teenage boy, whose name I didn’t catch, stood guard by Mary and Joseph’s items.

People kept coming down the stairs and climbing over Joseph and Riva until I stood atop the staircase and redirected traffic.

This small traffic readjustment seemed to particularly irk one woman who stared at me and defiantly walked down the stairs. Until she was forced to come back up and take the additional TWO STEPS around the railing as I had originally asked her to do. Because I am apparently looking for a fight, I asked “Really? What part of my Someone is laying down at the bottom of the stairs bleeding and being tended to PLEASE TAKE THE EXTRA TWO LITERAL STEPS TOWARD THE ADJACENT STAIRCASE INSTEAD BECAUSE OTHERWISE YOU’LL BE DISRUPTIVE caused you such the inconvenience that you felt it was okay to ignore my original request?”

I was so angry. Like, what even was the point of defiance in such a situation? How could ignoring such a request help you? I mean. If you want to stick it to The Man or be defiant, at least be smart about it. Otherwise you are just coming off as a complete moron. (I am obviously still very upset by this woman’s behaviour.)

She muttered Sorry and all I could do was turn away because I was too agitated and on fire to say anything other than to maybe call her a self-involved piece of shit.

Finally, someone who works at the Metro brought tape and taped up the entrance to the staircase. I went back downstairs and helped Mary sit next to Riva who was wiping down Joseph’s head and keeping him still. She gave the instructions, and we followed.

When the paramedics came, they came with two cops. One of the latter was a total asshole who was barking orders, and getting angry at Mary. None of us could understand why, so I simply ignored her and stood by Mary to see if she needed anything. The other cop was far kinder and gentler, and when they removed the tape to take Joseph up the stairs, he asked me to make certain no one went down again. I was happy to oblige and this time, no one got past me because I created a little barricade with my small carry-on and body.

Like I wrote above, Mary just wanted to go home, but of course they have a long evening ahead of them. Though I believe they are alright, I don’t anticipate they’ll be heading to any other Metro station any time soon.

Get your shit together and sort accessibility in your public transportation areas. Not everyone can afford taxis, and your commuter services for those with disabilities (like Mary) have forced her to wait an average of three hours. Your shittiness is wildly intersectional – hitting the disabled, the less wealthy, and the elderly. Way to go.

Also, give your cops some emotional intelligence training.

Today, I am grateful for:
1. Riva, whom I would want to take care of my loved ones. Thank you to all nurses; those of you who care about, and love what you do, you are truly guardian angels.
2. The open mic night we attended this evening and at which one musician played beautifully somewhere between Ben Harper and Dave Matthews. You took me back to my university days.
3. Seeing Laurence’s gorgeous face across dinner this evening.