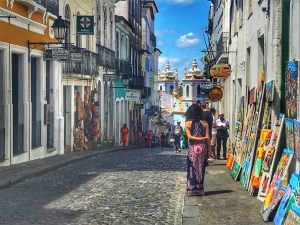 I was built for the tropics. My body feels at home here, and so does my hair. Brazil has given me proper hair envy, however; everyone here has a stunning kink. Big, natural, beautiful hair worn proudly. Envy, because I still struggle to find beauty in my own curls.

That’s my back in the photo. I turned 45 today. Natty and Brian wrote me small letters that made me cry over breakfast. One of my biggest lessons of this sabbatical is how love-filled my life is. When I am broken against dunya, please remind me if I lose sight.

Right now, I am sitting in the city center’s square watching people and enjoying a pocket of food stuffed with (I think) ground beef and onions. We spent almost five hours wandering and though Brian and Natty have gone back to our hotel, I’ve decided to stay out for a little longer until I head home to pray, and ready for dinner. My pocket of meat, I smothered in some sauce, again not sure what it is but together, it all tastes wonderful. I am also having a lime and mint juice which is, like the city itself, explosive in flavour. There are welcome chunks of lime floating in this drink. All juices here come in either a bag of sugar, or sugarless. Because I am not inclined to diabetes, I have opted for sugarless. Last night, I tried cashew fruit juice which I can only describe as the Switzerland of drinks. It is inoffensive, so not my style.

The wo/man (I can’t tell, and they clearly don’t want me to) who served my juice appears to serve for all of the kiosks in the square. Their name is Gabriella, and they are walking from one to the next, serving customers. A moment ago, they helped a woman change her daughter’s diaper, and now they are singing and clapping next to me.

What is there not to love about all of this?

Even the breeze tonight is perfectly fit.

They don’t waste time half-assing anything here, it seems. Not their colours, their flavours, or their sounds. And everyone smiles at you.

Maybe they’re laughing at us strangers and our cameras photographing their popcorn stands, but I don’t think so.

Their sweets are dripping in sugar, and their salty will turn you into parchment. I was woken up by drumming beneath my window at 7.30am.

Earlier, I had a bag of freshly made popcorn and couldn’t get past perhaps 17 kernels. Because salt.

Earlier still, I lost myself watching a drummer boy whose smile was as contagious as the beat. He’s clearly new, and he’s learning, with extreme attention and focus, and all laughter.

The drums say ‘Projeto AXE’; I can’t find any information on these drumming bands lining the city. All young, none asking for donations. Are they projects to help kids from the favelas? Are they trying to focus young energy into something other than crime? And what next? Where does this present lead, in future?

Which is the thing most difficult about these last 24 hours. There is little context to anything; most notably, little history here, not even taught in schools, I am told. I think, when you’re struggling to pull a People from (what we know as the history and) poverty, and from the crime, it is easy to make the argument that maths and science provide more life-skills than history.

So slavery is rarely mentioned here.

“Bahia alone imported in excess of 1,300,000 men, women, and children. While the areas of African importation shifted over time, more than 90 percent of the Africans who arrived in Bahia came from either the Bight of Benin or Central Africa. […]  Beginning in the early 1800s, Bahia received increasing numbers of enslaved Muslims and the Islamic population of Bahia underwent a period of expansion into the 1830s. Muslim community leaders in and around Salvador established schools—almost identical to those in West Africa—where students could learn about Islam and become literate in Arabic.” (Source: Slavery and remembrance(dot)org)

The people of Pelourinho are markedly darker than those I saw in my short time in Sao Paolo. While they might not discuss history, history keeps them still. Brian and Natty tell me this will continue to be the case, that their dark and beautiful skin is more local that elsewhere.

I couldn’t locate the Muslim element or vibe mentioned above. But noted the clothes which reminded me of Tanzania. And the colonial structures I have seen in far too many countries across this world.

This small city is explosive. In colour. In sound. In scent. It is undoubtedly an unexpected feast in so many ways, but controlled. I have a feeling that certain people and ‘elements’ are not permitted into this center. So, as Brian perfectly expressed, there is a sterility here which we can’t shake.

The cobble-stone streets are lined with cafes, musical instrument shops, clothing stores, and art studios. If you didn’t know Brazil, you would be shocked by what lies on the outskirts. Most buildings are freshly painted in any shade of pastel, but if you look closely, you will notice that too many of them are empty. When you’re not too captured by the colourful buildings, you’ll notice that too many are walking without shoes, and their feet have acclimated. When you round corners, or go to elevated platforms, you learn that the backs of the beautifully coloured buildings have been permitted to slide into ruin; nothing is painted like it’s front, and roofs – which may be either terracotta or plastic painted as terracotta – are rotting.

We spent nearly five hours walking the streets, and everywhere, there is drumming.

Burned sugar, and sauteed garlic are the only scents. By the ocean, there is a small hint of salt-water and fish.

Inside of stores, you smell only soap.

Did I mention how everyone smiles?

Today, I am grateful for:
1. The ability to share family history inside of safe and love-filled spaces.
2. Another year of health and challenge.
3. Every message received today, and especially the Keanu Reeves gif (thank you, G!).